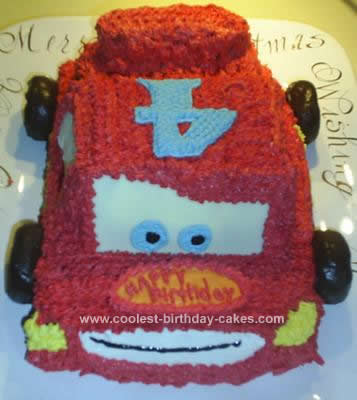 My son wanted a CARS themed birthday and I usually make a family birthday cake to celebrate. I honestly looked around on this website and took inspiration from others for this Homemade Disney Cars Lightning McQueen Birthday Cake.

I used a 12”x14” jellyroll pan and 2 boxed cake mixes. They made a total of 2 cakes. I used my grocery store’s butter cream frosting and had them dye it red and kept some white to add my own food coloring to it to make the orange, yellow and blue. I used black gel for the smile and eyes. Store bought canned frosting was used in between the layers to hold the cake together. I also bought white melting chocolate to make the windshield and little chocolate covered donuts for the wheels.

I cooled the cakes for a day on cooling racks. I cut both cakes in half. The 1st cake I simply frosted with the canned frosting and stacked both on top of each other. I cut one of the 2nd cake’s halves in half and placed where I thought the top of the car would be. I frosted those two pieces together, then cut the front slightly on an angle to be the windshield. I used the leftover pieces, of the 2nd half, to make the wing on the back. I didn’t frost them together until it looked good. I melted the white chocolate and poured some out, on a parchment lined cookie sheet, in the shape of the windshield. I made it a little bit bigger in the event of breakage and to be able to push it down into the base of the cake to stay. I let that set up in the freezer until it was hardened. When ready, I used kitchen shears to cut it to size.

I used my white frosting to frost where the windshield was going to hold the white chocolate. I also frosted the grill for his smile and the 2nd layer where the windows would be. I stuck the chocolate windshield on and made sure it was pushed down in the base a bit to stay. Next I used the yellow frosting and decorated the headlights and the lightning on either side of the car. I used the red frosting and piped out the rest of the car. I placed the little chocolate donuts on and piped on the eyes and in blue, my son’s age, 4, on the top of the car, and his name on the bumper (not very centered. The orange frosting to make the rusteez-like-oval was a complete after thought. I smoothed it out and piped “Happy Birthday” on it. The black gel was used to make the smile and the dots in the eyes.

The cake was a hit with my son and my family!! It did take some time, but well worth it. “Ka Chow!” 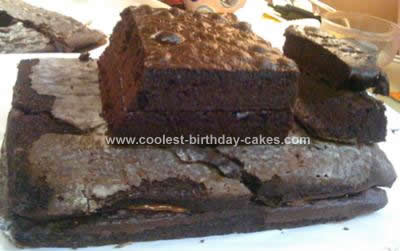 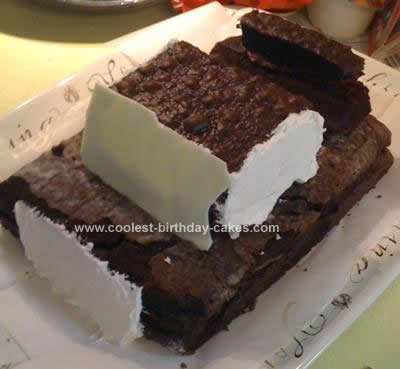 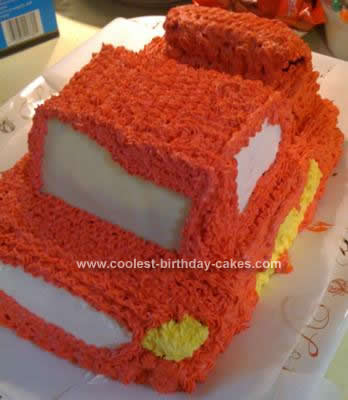