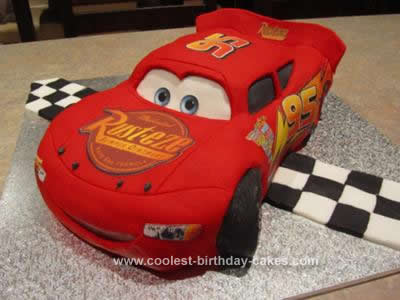 Firstly, you shouldn’t be listening to any advice I give. I don’t make cakes as such. I’m a 30 year old Australian Dad, who just makes his kids their cakes. I have no training and possibly no idea when it comes to baking. In the past I have searched the net for a cake recipe for my annual bake. I only make and decorate cakes for my son’s birthday (he just turned three) and now I have 2 sons so there will be two cakes each year. I have always put effort into the cakes I make and have gathered interest from my wife’s friends to see what kind of cake I’m going to reveal for the birthday party.

This Homemade Lightning McQueen Cake is my third cake ever. I used this site for ideas and inspiration, so I thought I should contribute. I can’t offer too much in the way of advice, and please forgive me for my lack of technical knowledge.

The first thing I did was searched on the net for an image of all the stickers over the body of Lightning Mcqueen. I stumbled across a forum which was based upon model cars for the “Cars” movie where the forum members made their own art for the model cars. These were probably created on some sort of CAD program. I found a high resolution image of all the stickers that I would need.

I then searched for a profile image of Lightning Mcqueen. I used a computer to scale and overlay the sticker images over the profile of the car and adjust them where required. This was done, so I could print the stickers (decals) on edible paper – it was actually like edible icing sheets (very thin), but I don’t know the name. I had it printed at a patisserie anyway.

I printed out a couple of copies of the profile of the car on A3 normal office paper, so I could use it as a guide to size rims and tyres and use it as a stencil to carve the car. I used a toy car to scale the approximate dimensions.

I made the wheels out of red and black precoloured fondant. I just moulded them over a plastic egg that I found in the boy’s toy box. Then used an icing (frosting) pen to add the wheel details. These were made the night prior to cake construction.

I used a few large tins to make a chocolate mudcake for the body, which took forever to cook – amateur mistake. I should have used smaller tins and more of them. Anyway, I let them cool and stacked the cakes and went to work on carving the cake. I would use the stencil I printed on A3 to get the profile right, but the rest was carved by eye.

The next step, I made up some dark coloured butter icing (frosting) and covered the entire car. I chose a dark colour in case any of the fondant I would apply later did not cover some areas (this wasn’t an issue, but I just covered all bases).

I then started with the windows. I had white fondant and precoloured black and red fondant at my disposal. I rolled some white and black fondant to get the grey for the windows. I cut just enough to cover the windows and then tapered the fondant near the edges of the windows so that the red fondant wouldn’t have a bump under it. The white fondant was rolled and used on the mouth and windscreen. I then rolled the worlds largest sheet of red fondant and found the best way to transfer it over the cake was by putting some baking paper over the fondant and rolling it all around the rolling pin. I then unrolled it over the car body. I don’t know how the professionals do it, but that worked.

Using a small ball of red fondant, I rolled this over the body to smooth it out as I saw this trick on a youtube video. Once happy that the body was smooth (or smooth enough for my skills), I cut the mouth and windows out to reveal the white and grey fondant that was underneath. I then rolled out the rear spoiler ant propped it with toothpicks until it could support itself as it hardened slightly. The tooth picks were then removed.

Next it was time to add the stickers. From memory I just cut around them with a knife and added a touch of water to the surface that they had to be applied to. The edible images were added where needed – even the text on the tyres are edible images. That part was very easy.

I went to bed at around 3am, so I could get a solid 3 or 4 hours sleep for the party the next day. Our boy was impressed with Dad’s efforts. 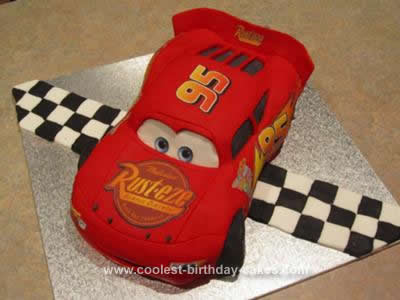 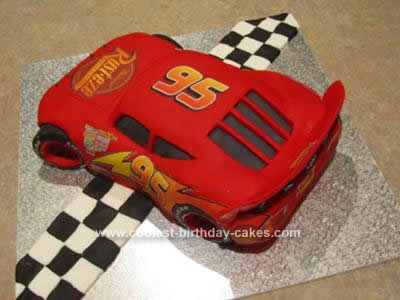 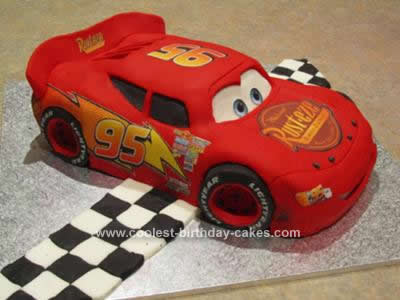