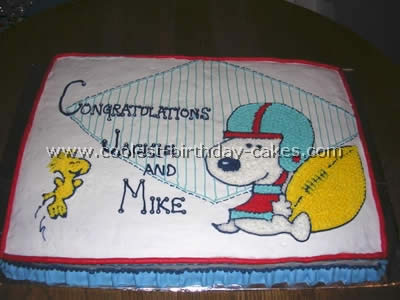 I was asked for a baby shower to make Snoopy and Peanuts cartoon cakes. The mother sent me this image of the snoopy baby linens she bought and wanted the football snoopy and little flying Woodstock. This cake is a full sheet cake (18×24). Half is chocolate, half yellow, iced smooth with butter cream. The border I made to match the wallpaper border, and added the ruffle border on the cake like the baby comforter.

I tried my best and freehanded the Snoopy and the little Woodstock next to it. I think it turned out pretty well. This cake was so heavy; make sure you have a thick board to support the weight of such a large cake. I was so afraid of it breaking in half where the two cakes joined together (I have heard stories of this happening) but it made it safely to its destination and was a hit!

Thanks for sharing all the great cartoon cakes on this site!

The cake was made for a friend’s baby shower. The doghouse itself is 5 layers of cake using a square cake pan. The first two layers have about 3/4 of an inch cut off for the skinny part of the cake. The top three layers were then cut at an angle for the roof. The Snoopy on top was made out of Rice Krispie treats and sculpted into the character. It was covered in Fondant (my first time using it) and then painted with frosting coloring.