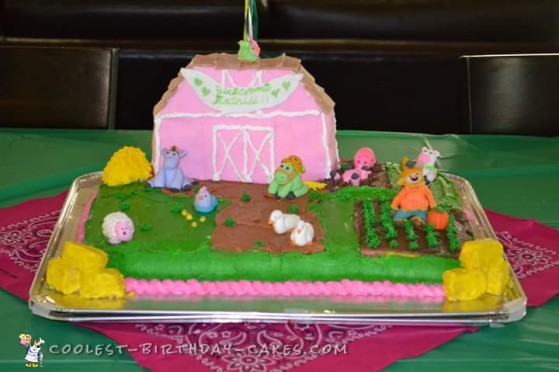 I had a lot of fun making this girl baby shower cake for my best friend’s baby shower. Girl Baby Shower Cake Directions I formed all the little farm animals and the scarecrow out of the decorator preferred fondant about three days in advance so they would have time to dry a little. For the … Read more 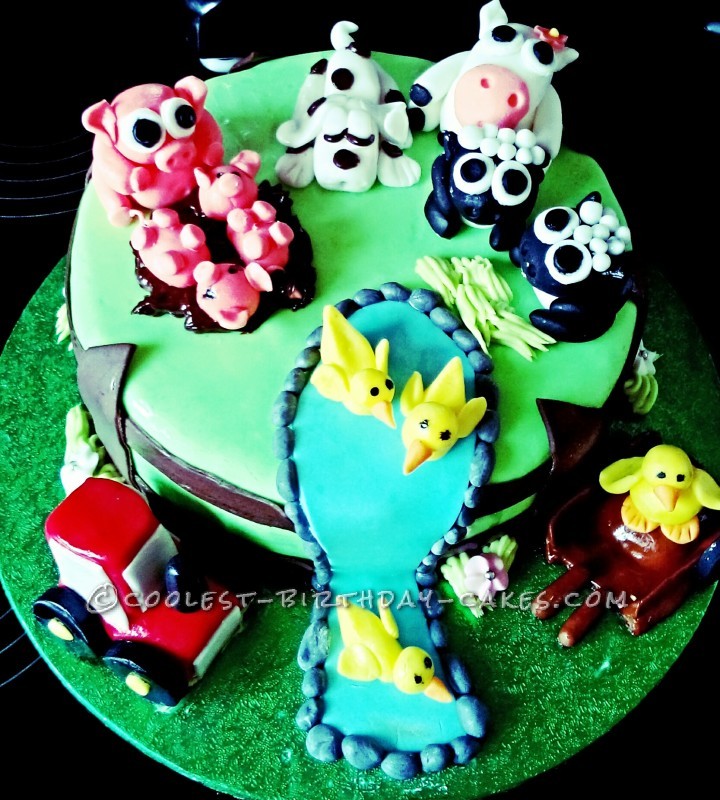 I created my Old McDonald Had a Farm cake for a local county show contest and was delighted to win 1st place. The interior of the cake I made with chocolate biscuit cake which consists of chocolate and lots of it, marshmallows, biscuits and condensed milk. After the cake set in the fridge I smothered … Read more 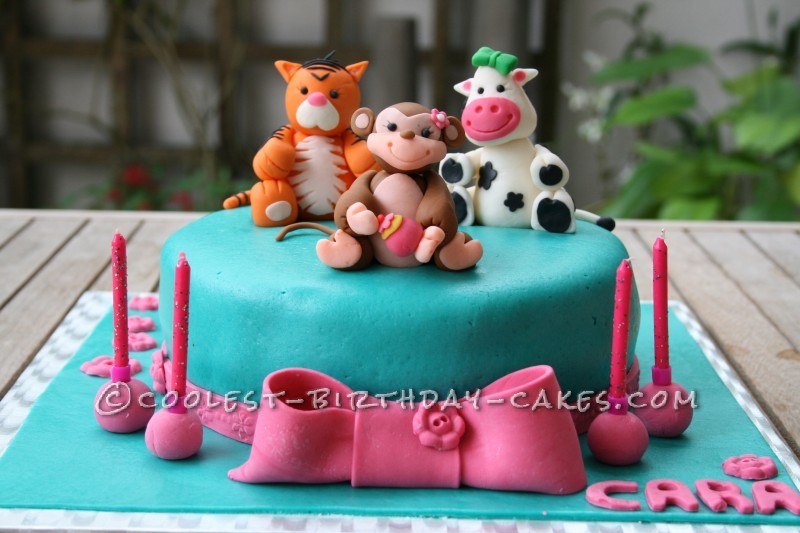 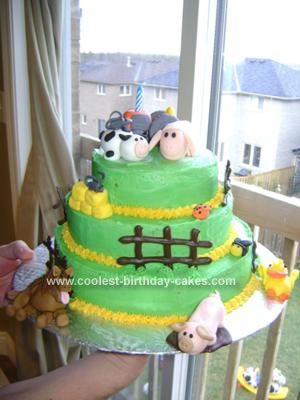 For my son Quinn’s first birthday, I made a homemade barnyard birthday cake. I used three different circle pans, and because I don’t like the taste of fondant I opted for Wilton’s buttercream recipe and then made all the animals out of fondant. It was my first time using fondant, and I loved it! I … Read more 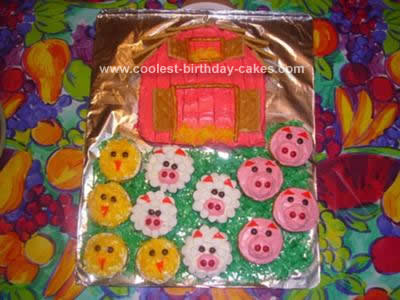 I made an 8×8 cake for the Barn Cake, and trimmed the top third into a peak. The roof was “shingled” with graham crackers. Graham crackers were also used for the barn doors. Pretzel sticks were used for timbers, and yellow tinted coconut was used for hay. If I were to make this again I … Read more 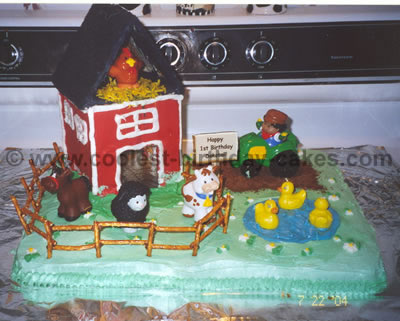 First, a couple days before the party, I started on the barn. I used graham crackers (my friend helped me with this – it is helpful for more than two hands for this step!) We used graham crackers and held them together with lots of melted chocolate. As we “stuck” each piece (walls, ceiling, roof) … Read more 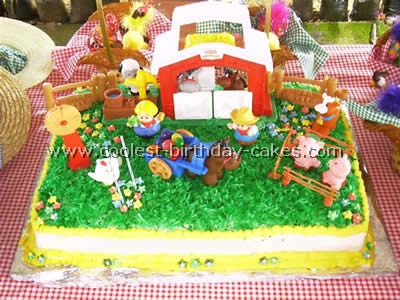 I ordered the base cake in a local supermarket only with the white and yellow icing. I tinted green coconut flakes using food coloring. You need to let the flakes dry, so it’s best if you can do it the day before the party. Put the tinted coconut flakes on the barn cake and decorate … Read more 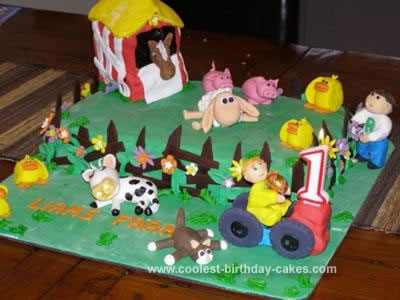 I made this homemade farmyard and barn cake for my friends son’s 1st birthday. Its a chocolate mud cake with chocolate ganache and fondant icing. The barn is cake covered fondant. The birthday coincided with Easter so I included some Easter chicks in the scene. I also included the family cat and birthday boys big … Read more 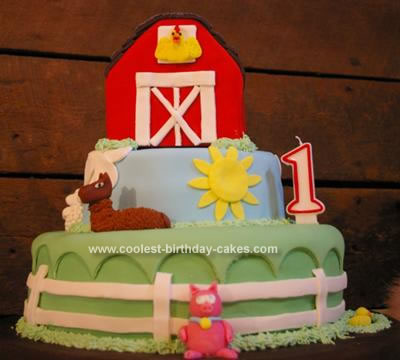 This cake was for my daughter’s 1st birthday. Her party was farm themed, and I couldn’t be happier with the outcome. The bottom two layers of the homemade farmy first birthday cake were red velvet with cream cheese filling. This was the first stacked cake I have ever done, so needless to say I was … Read more 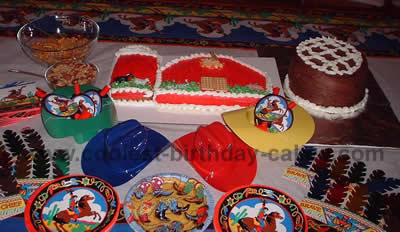 Cut the barn shape out of the 9×13 and place it on your board with the loaf next to it (as the silo). Use a triangle from the 9×13 scraps to put the top on your silo. The barn is iced in red of course with white accent. The doors are club crackers. Dyed yellow … Read more 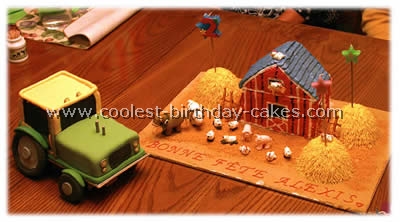 I made this special barn cake for the 2nd anniversary of my son Alexis. He loves tractors and I wanted to create this barnyard cake for a while now. After seeing a candy truck made of rolled fondant in a Wilton book, I got the idea to do a 3D tractor for my son. For … Read more 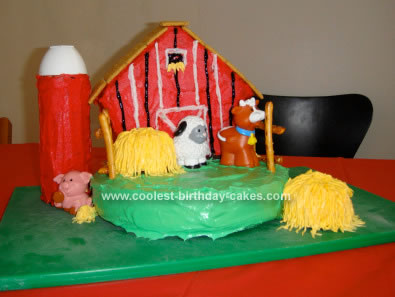 I made a 9″ chocolate cake and frosted it with a vanilla butter cream frosting colored green for this Barnyard Child Birthday Cake. Then I baked the house cake from the Wilton house pan and held it on the round cake with large skewers. I frosted the barn red, shingled the roof with graham crackers, … Read more 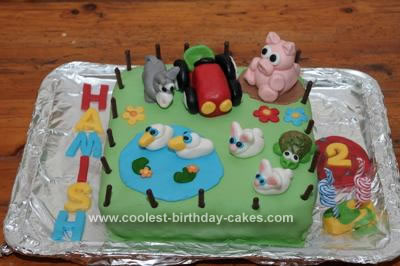 My little boy was having his party at a local childrens’ farm yard so I made this Farm Yard Cake to fit in with the venue. It was a square chocolate cake coated in caramel (sweetened condensed milk boiled in a bowl in the microwave until it turns golden brown – far easier and safer … Read more 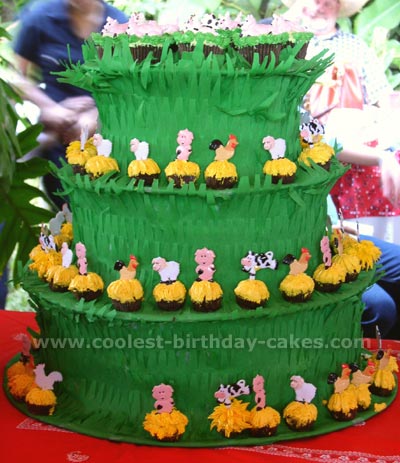 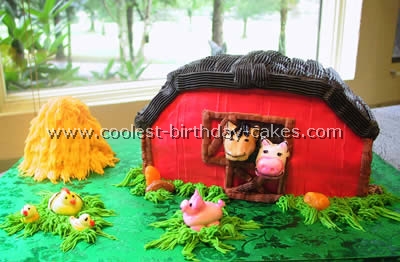 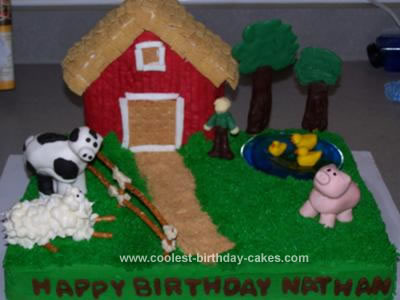 I made this homemade barnyard birthday cake for my son’s first birthday. I used a basic vanilla cake covered in homemade buttercream icing. The barn is made using the stand up house mold, the roof is Chex mix. The cow, pig, and ducks are make out of homemade marshmallow fondant. The pond is just a … Read more 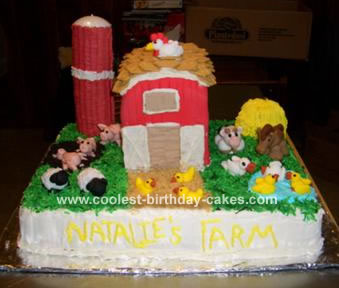 I made this farm cake for my granddaughter’s birthday. The animals are made of fondant. The barn is made from rice krispie treats covered in fondant with impressions for the boards made with a ruler. I iced the top and added graham crackers from the 100 calorie packs. The cake is 10 x 15 iced … Read more 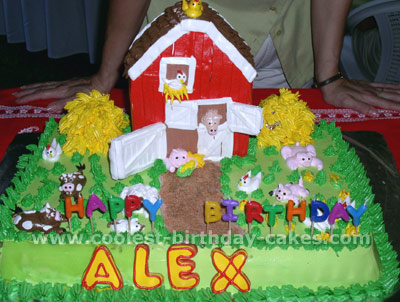 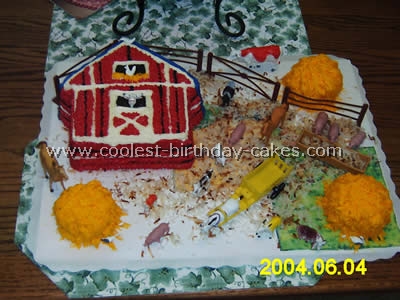 For this barn cake I used the Wilton stand-up house pan for the barn and I used cupcakes for the haystacks. I used the grass tip with golden yellow to ice the haystacks. I bought a pack of barnyard animals at Walmart and cut the head off of the cow for the window. I used … Read more 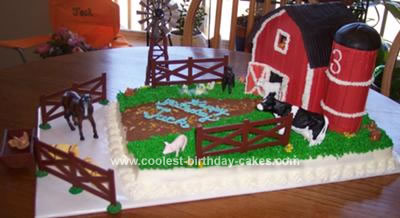 This Tennessee Farm Cake was made for my sweet grandson’s 3rd birthday. I got ideas from several submissions on this site. The cake itself is an 18×26′ sheet cake(1/2 chocolate and 1/2 white cake). I iced the entire cake in white buttercream. The barn was made of cardboard, iced with royal icing and allowed to … Read more 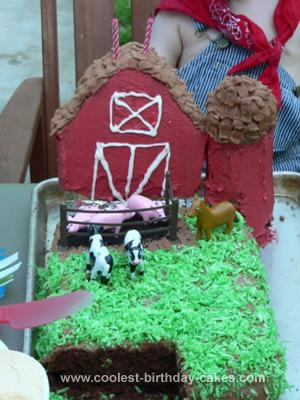 This was for my son’s 2nd birthday. We had people coming with lots of dietary restrictions, so it is basically three cakes. The sheet cake ( I never got a picture before it was cut. It had used to have a tractor on it, too) was dairy free. The silo was gluten-free cupcakes stacked on … Read more 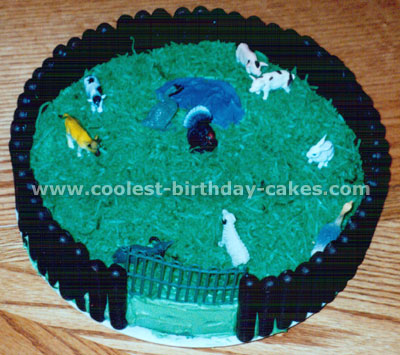 I then added green food colouring to shredded coconut. I sprinkled the coconut over the top, leaving a little spot for a pond (which was just blue icing). To top it off I placed little plastic animals randomly on the surface of the coconut. 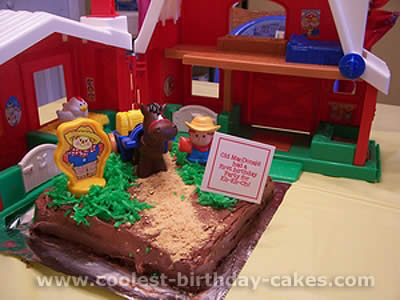 I prepared this barn cake and cupcakes for my son, Elis first birthday party. We had an ‘Old MacDonald” theme because we like to change the lyric to that song to “Eli-Eli-Oh” for him! I created both cakes (the barn cake and piggie cupcakes) from one box of golden vanilla cake mix (I added an … Read more 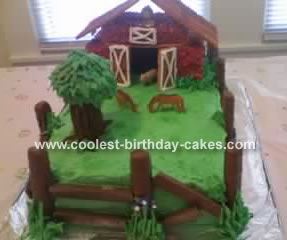 My daughter loves horses and wanted her barnyard cake to look like a horse ranch. I just started making cakes for a hobby and thought I could do that. My sister-in-law suggested that I use Twix for the fence post and Kit-Kats for the fence. I shaped the barn and tree out of rice crispy … Read more