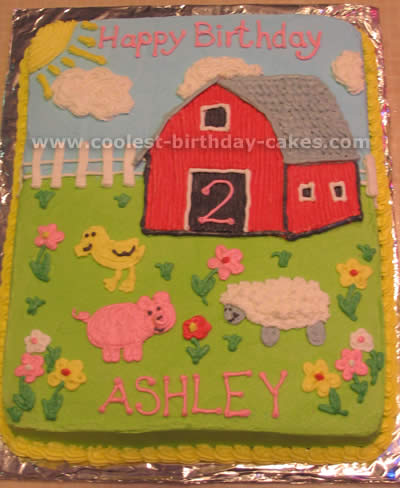 This is a cake I did for my niece’s 2nd birthday. I just made a 1/2 sheet cake and buttercream icing. The idea came from napkins that my sister had bought. I freehanded the barn and figure-piped the animals.

COW HEAD: with Royal Icing, Use tips 2, 3, 4, 12, 81. Use tip #12 and hold bag at a 45° angle to cake. Starting at neck, squeeze with medium pressure and move bag upward, increasing pressure to build up head, with a continuous shell-like motion, return to neck.

Picture of cake by Aubrey B., Newton, IL

These ideas were for my son Grady’s first birthday party. I found the design for the barn in a cookbook, but tweaked it a little bit to my know-how.

I used only one 9×13 cake for the barn. The doors to the barn are “Chicken in a Biscuit” crackers with pretzels surrounding and the hay in the loft is Piknik shoestring potato chips. The grass is green dyed coconut. I then iced the cake with red tinted frosting and used a Pampered Chef Easy Accent Decorator to ice the roof of the barn and silo.

After doing the barn cake, I realized I needed a cake for Grady to eat all by his self, so I thought as long as I was going to make a barn, why not have hay bales. I used the Pampered Chef Mini Loaf pan to make four hay bales at a time. I used yellow food coloring to tint the frosting and then again used what I had with the pretzels and shoestring potatoes to make accents.

I made this cake for my son’s first birthday. We chose this theme because animals (cows, horses and dogs especially) and tractors are among his favorite things. There were 30+ people invited to the party and so I didn’t want to have to “decorate” (with tips) a cake as this isn’t one of my greatest skills:-) So, I decided to go 3-D with only a few decorations made using cake decorating tips.

First, a couple days before the party, I started on the barn. I used graham crackers (my friend helped me with this – it is helpful for more than two hands for this step!) We used graham crackers and held them together with lots of melted chocolate. As we “stuck” each piece (walls, ceiling, roof) together, we froze the structure on a flat plate. Once the structure was there, the next day, I iced the barn using the appropriate color icing. Using a tip, I later piped on the white outlining and windows. For the mow, I dyed coconut (using yellow food coloring and a few drops of water), stuck it in the icing for straw and set a Fisher Price chicken in it.

The cake itself was made of two 9 x 13’s placed side by side. I iced them both green for grass and in one corner I iced a blue pond and set ducks on it to look like they were swimming. (I was actually going to cut a hole out of the cake, stick in a small blue bowl of water and have ducks floating in it, but in the short amount of time I had, I couldn’t find ducks that would float.)

Behind the pond, I crushed chocolate graham crackers to look like dirt and sprinkled this around in the shape of a field. On top of this, I put a Fisher Price tractor. To the left of all this, I made a place for the barn (hint: Cut a piece of cardboard big enough for the barn to sit on. Cover this with tin foil and lay on the cake where you want the barn to be. Ice over the edges so it’s not noticeable. Otherwise your graham cracker walls will melt right into the cake!) In front of the barn, I placed a fence, made from stick pretzels stuck together with melted chocolate. Within the fence, I stood Fisher Price animals.

With a cake tip, I added a border around the bottom edge of the cake just to finish it off and also with a tip, I added little white daisies with yellow centers and green leaves around the “grassy field”.

I then added a computer generated sign (pasted to a popsicle stick) to the cake wishing my son a happy birthday.

Lastly, and I did this right before the guests were to arrive, I set the barn on the pre-placed cardboard floor. (Note: keep the barn frozen until you’re ready to put it on the cake to keep it firm.)

This is a red barn made with a 9×13 and a loaf pan with vanilla cake.

Cut the barn shape out of the 9×13 and place it on your board with the loaf next to it (as the silo). Use a triangle from the 9×13 scraps to put the top on your silo. The barn is iced in red of course with white accent. The doors are club crackers. Dyed yellow coconut is the hay up in the hay loft with a wheat thin for the door & chicken hanging out. Dyed green coconut is the grass, and it is complimented with other inexpensive farm animals we already had.

Voila! A great barn. I also made a plain chocolate for chocolate lovers. Beware of the red icing mess though! Red mouths and such were abundant, but oh so fun….

This cake is actually pretty simple to make; it was just a double layer round cake. I iced it with green frosting. I placed chocolate finger cookies around the edge of the cake to look like a fence, leaving a little opening to place the gate.

I then added green food colouring to shredded coconut. I sprinkled the coconut over the top, leaving a little spot for a pond (which was just blue icing). To top it off I placed little plastic animals randomly on the surface of the coconut.

Picture of cake by Jodi N., New Palestine, IN

This cake was very easy. We chose a farm theme for my son’s first birthday because he LOVES animals, particularly horses.

I baked a huge cake, using a Wilton cake pan. It took 4 boxes of French vanilla cake mix. I made homemade butter cream icing. The barn is made out of iced graham crackers. I dyed coconut for the hay and grass.

The animals are Fisher Price Little People. The pig is sitting in a puddle of chocolate icing. I finished off the cake by sprinkling green candied icing sprinkles all over the top. It was a great hit and my son loved it.

This is our son’s second birthday cake.

I used plastic fencing and animals. I made the water with grass around it for the ducks. I made a mud hole for the pigs to play in. The sheep are following the ducks to the water hole. The horses are eating out of a plastic trough filled with graham crackers crumbled to a fine dust. The cows are grazing in a pasture of frothing grass.

It was great fun to make and the party guests all got to take home one of the animals. I also made cupcakes with bright-colored frosting, each with 3 presents made of starbursts with frosted bows, and a candle in the middle so that each one of the friends at the party could blow out their own candle. The kids loved that they had their own to do!

I made this cake for my Sister-in-Law’s baby shower. She had selected a barnyard nursery pattern, so we used that as the theme for the shower.

The barn is made of two 9×11 cakes stacked on top of each other. The slanted roof was made by baking a cake in a bread loaf pan, then cutting two triangular shaped pieced and one rectangle from the cake.

The silo is a stack of store-bought sugar cookies, glued together with frosting. The grass is coconut colored with green food coloring, and the path to the barn door is brown sugar. The back of the cake has a picture of a bell. Bell is a family name, and one member of the family has a bell painted on their barn, so I put a bell on this barn.

This cake was very easy. Chocolate frosting for the dirt, green tinted coconut for the grass and graham cracker crumbs for the rods. The backdrop barn and the characters are all Fisher Price Little People. Something anyone can do and was enjoyed by all.