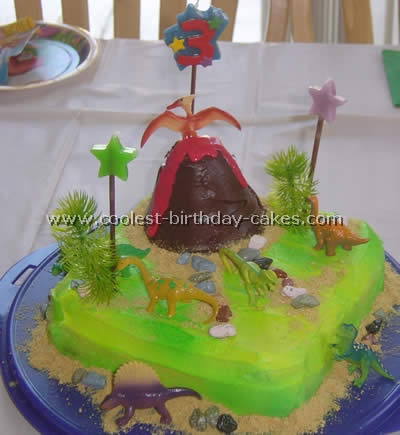 I made this cake using a combination of ideas for dinosaur cakes from this site. It is an 8×8 square. I used the spray color in green and yellow. The volcano is a regular cupcake turned upside down with a mini cupcake on top (also upside down). I found the candy rocks at the local … Read more 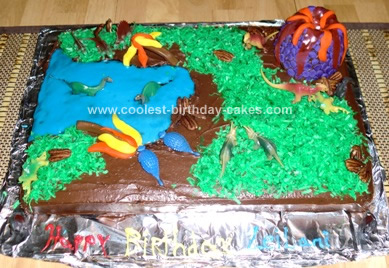 For her 10th Birthday my daughter wanted a cake with dinosaurs on it, so I made this Dinosaur Scene Birthday Cake Idea using some easy techniques to set the scene. I started out with a 12×18 inch Wilton pan baking a Devils Food Chocolate cake. For the Volcano I used a two cup Pyrex measuring … Read more 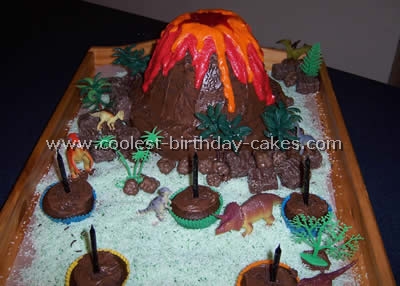 It was my sons 5th Birthday. He loves Dinosaurs so we decided on a Dinosaur theme. Last year for his 4th I had already made a fearsome Dinosaur birthday cake and I didn’t want to do the same this year so I was a bit stumped! It was my son who came up with the … Read more

I got my idea for dinosaur cakes from this web site. Just baked a 13″ x 9″ cake and frosted it in bright green buttercream icing. The volcano is a “baby” bundt-cake on top of a round 6″ cake, frosted in chocolate icing. The lava is melted life-savers candies (red, yellow and orange combined). The … Read more 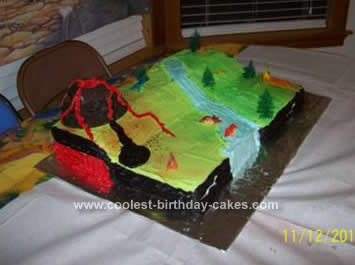 This Dinosaur Scene Birthday Cake Idea was made for my sons’ combination party. They turned 3 and 4. It is a basic Jurassic landscape with river, sand pit, tar pit and volcano. My goal was to make it look like the land was “cut” and lifted, so the edges are dirt, fossils and Magma underneath … Read more 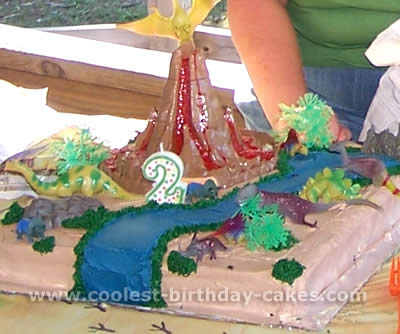 This was a real simple dinosaur birthday cake for my son’s 2nd birthday. It is a large square cake iced in a light brown icing. I used a large tip and put the river down the middle and down one side like a waterfall. I then added a little grass with a cake tip. The … Read more

I made a sheet cake for the base (landscape) of the dinosaur cakes out of a pound cake. The volcano is made from three round cakes (yellow cake mix) each a little smaller than the next. I cut the cake at an angle from top to close bottom tapered. I used a biscuit cutter to … Read more