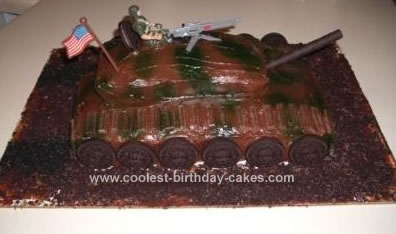 I made this Army Tank Cake Design for my son’s 8th Birthday. He’s had an army party the past two years and I thought this year it would be neat to make his cake. I use ideas from this site and others. I made a yellow cake mix in a 9×13 pan and added blue … Read more 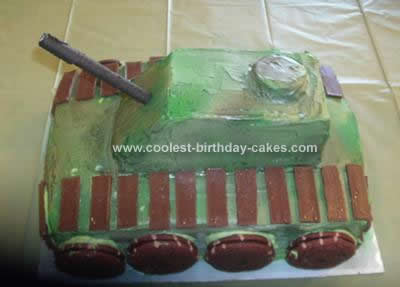 My son is into everything military, and for his 7th birthday he wanted an Army theme. So I found this web site and saw the perfect idea – Army Tank Cake! I used the ideas from others who had posted here, and the cake was a huge success. My daughters helped me with it, and … Read more 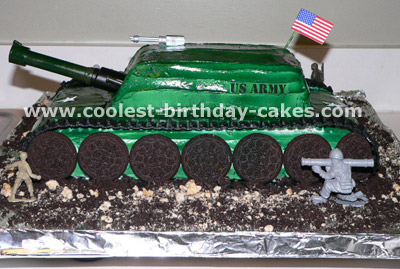 I used a 9×11 glass dish for the bottom of the tank. I used a glass, loaf pan for the top. I shaped the top using dental floss; I also sliced the “loaf” of cake in half. I iced the whole cake with regular white vanilla icing. I used the computer and printed the US … Read more 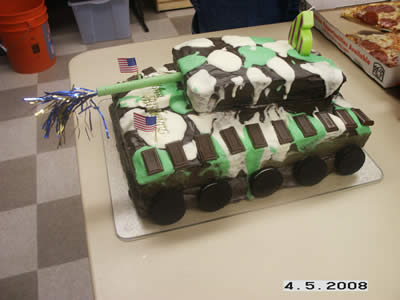 For the batter of the tank cake I used a combo of dark chocolate and yellow cake mixes that I made from scratch. I used food color for part of the yellow cake mix to make it green. I poured the cake mixes in the pan by cupfuls, alternating colors to give a camo appearance, … Read more 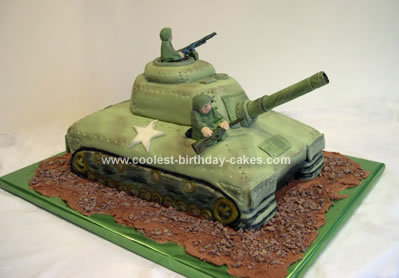 I made this army tank cake for my grandson’s 11th birthday. I am self-taught and read a lot about the various techniques on-line. I mix a common fondant recipe with a rolled butter cream recipe which gives a better tasting icing. The cake itself was made by mixing chocolate fudge cake mix with brownie mix. … Read more 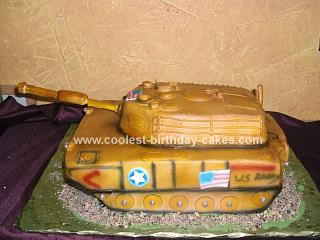 This Army Tank Cake was made from two 1/4 sheet cakes, filled and stacked, then taking a serrated knife starting at the front, carved down to an angle, then doing the same for the back, but leaving a block in the middle for bumper, then using rice krispies, two layers cut with a knife for … Read more 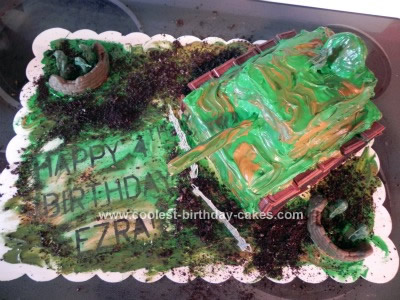 This Homemade Army Tank Birthday Cake was for my son’s 4th birthday. I looked through the cakes on this site, then created my own from there. I made one 8 1/2 x 11 cake, then cut it in half and stacked them on each other. I also put another cake in a loaf pan as … Read more 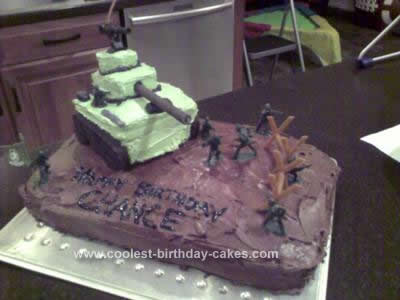 For my son’s 6th birthday, he asked for a Tank/Military Birthday Cake. I thought a tank cake would be perfect. I scanned through this website to get ideas as well as searched the web for pics of real military tanks. I tried to keep it simple – and though I originally wanted the entire cake … Read more 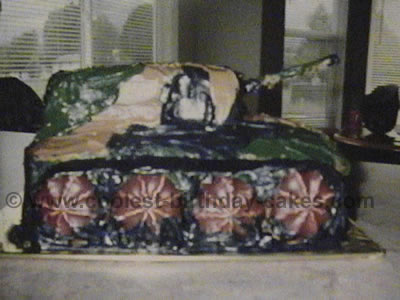 To make this tank birthday cake for my 5 year old sons birthday, I first I got two 9×13 pans to make the two layers of the cake. Then I used a 3×9 pan to make the top of the tank. I stacked the two long pieces on top of one another and then set … Read more 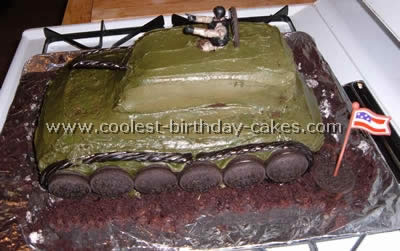 I got the idea for a tank cake from this website. I used three boxes of chocolate cake mix. I used two 9X13 pans and a large loaf pan (some mix left over). After they cooled I put the loaf in the freezer. I placed the two 9X13 cakes on top of each other and … Read more 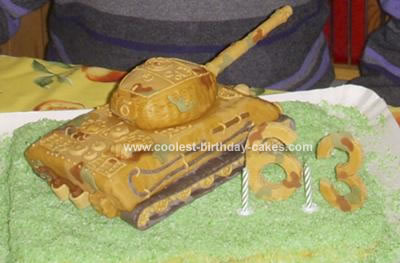