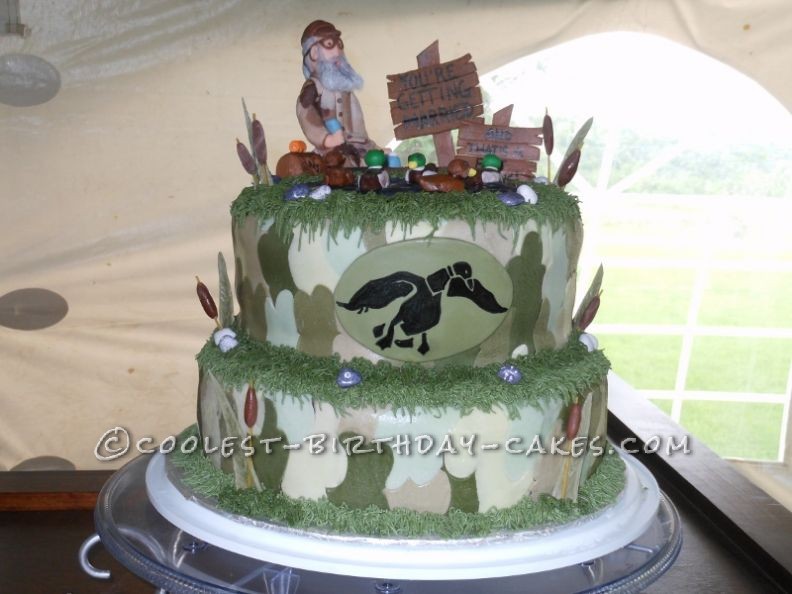 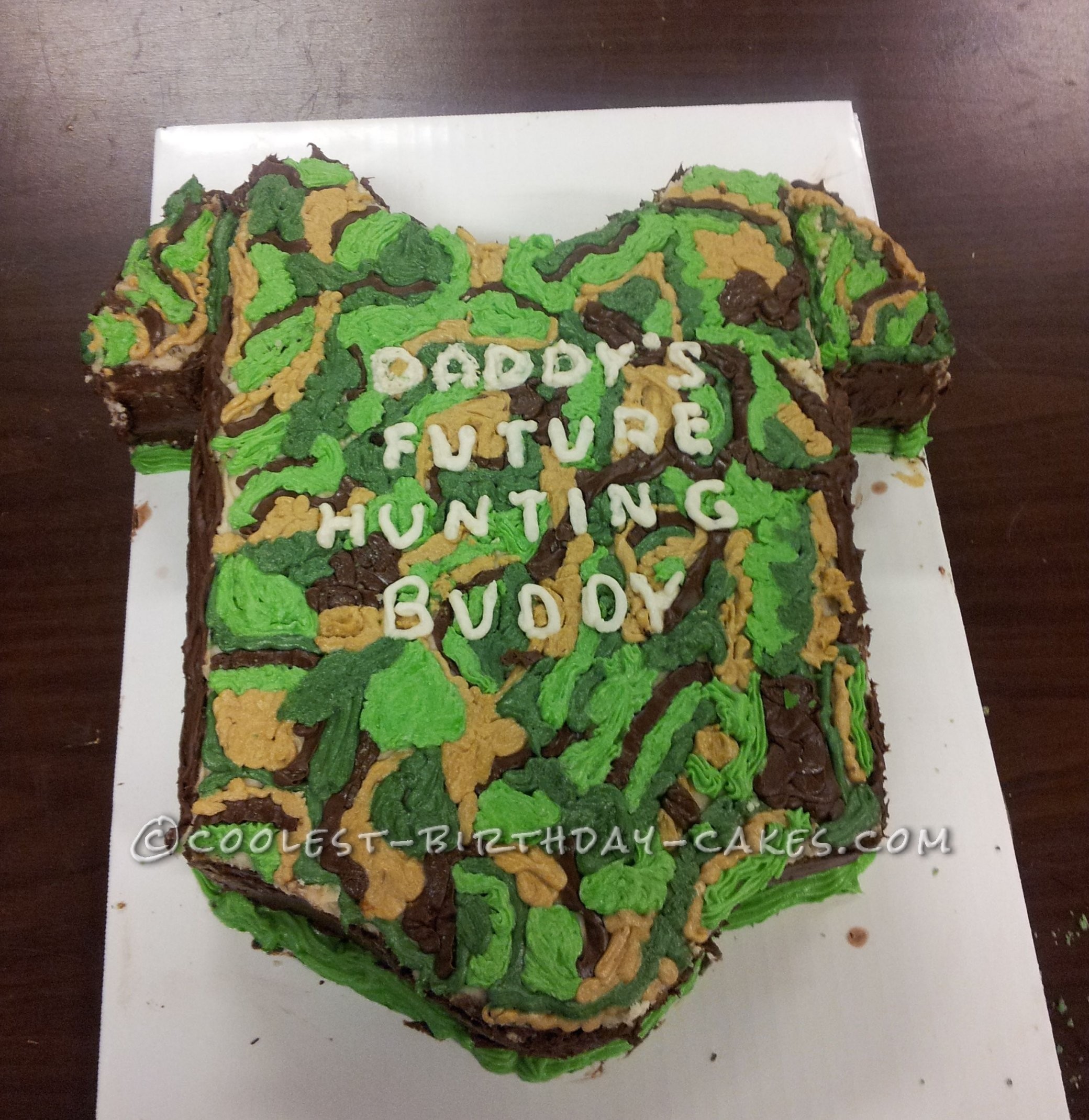 My friend had a camo shower and I took a challenge of making a camo baby shower cake. After looking at some pictures online I came up with these. For batter I made chocolate cake, 2 white cakes divided, one light green, other dark green, then a yellow with some brown food/icing dye. Randomly placed … Read more 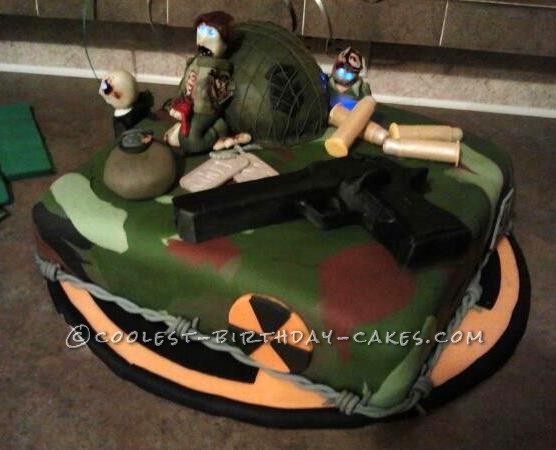 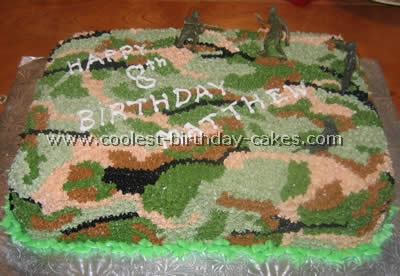 My son wanted a camouflage cake for his 8th birthday. I used one of his army sweaters for a guide and randomly laid out the six colors. For the cake I just used an easy cake recipe and for the decorating I used black, juniper green, moss green and brown done in two shades then … Read more 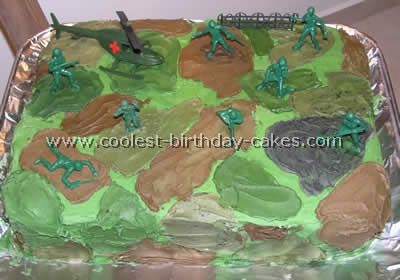 My son wanted an “army” theme for his 6th birthday so I came up with this “camouflage cake”. It is unique because it not only is decorated on the outside but on the inside as well!!! I used four marble-cake mixes making a two-layer cake for this easy cake recipe because there were so many … Read more 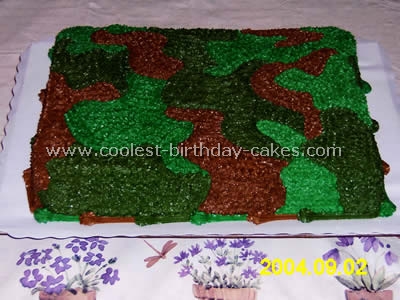 This cake was for a soldier going to Iraq. They wanted the whole cake camouflage. This is a very easy cake recipe, you just use the army camouflage colors for frosting and cover the cake. They loved it. 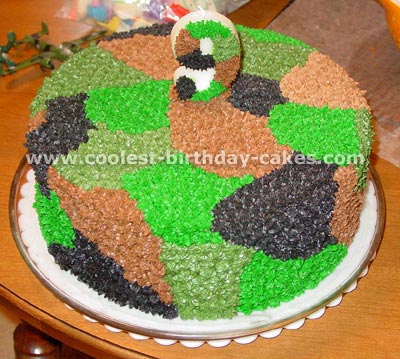 My nephew wanted a camouflage cake for his 9th birthday. It was a 10″ chocolate cake. I used two different tints of green (leaf green & moss green) chocolate and black icing. 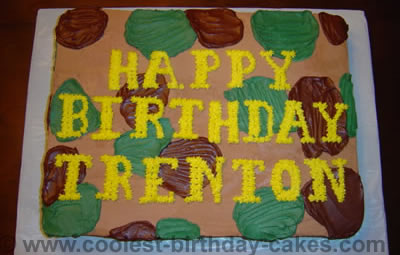 Heres a birthday cake picture of a Camouflage cake for my nephew’s ARMY bash. I started with an 11″x15″ sheet cake. I used 3 marble cake mixes and added green food color to the cake mix to give it the “Camo” look on the inside of the cake and that took everyone by surprise. There … Read more 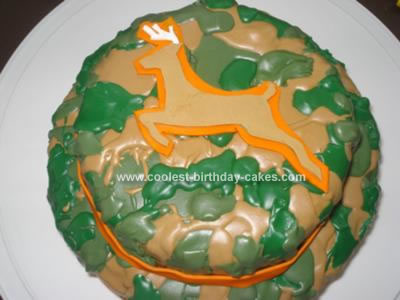 My 5-year-old daughter wanted to make a hunting cake for Father’s Day. We didn’t have time to work with fondant, so we decided to warm our frosting slightly in the microwave and drizzle it onto the cake with spoons. It was so easy and so much fun! We place our crumb coated cake on a … Read more 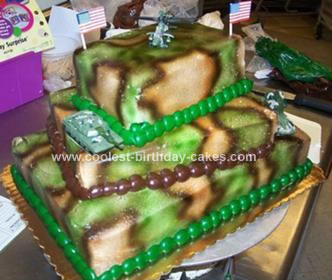 I’m a cake decorator at a grocery store, I love when someone comes up and asks me to do something different. This homemade camo gift cake (for a military man…) is a quarter sheet [9×13 cake] on the bottom then I cut a quarter sheet in half and put it on the quarter sheet then … Read more 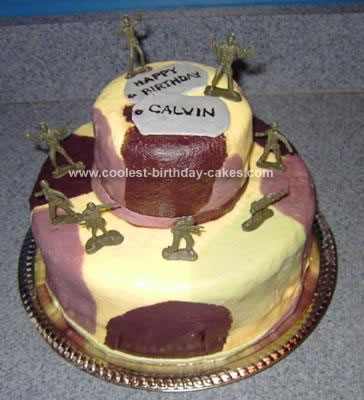 So my girlfriend told me about this website and wanted her son’s birthday cake to look just like one of the ones already listed. I think it looks pretty good, so I thought I would add mine along with the others. This homemade camo military cake is four layers, all chocolate with chocolate icing, and … Read more 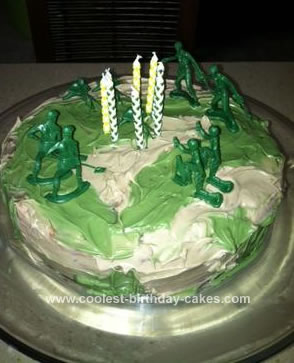