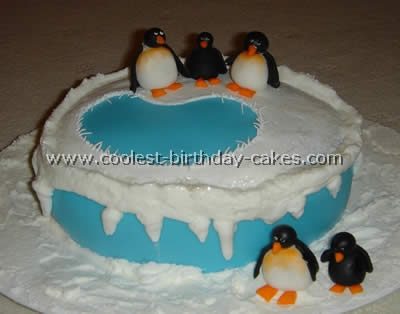 You can use any cake and frosting recipe. Bake cake and frost. Cover with blue colored fondant. The ice and snow are done with royal icing which I applied with a tip (Wilton #11 or #12) and also used a (damp) knife to spread. Use tip #2 or #3 for the fine/pointy pieces of ice. … Read more 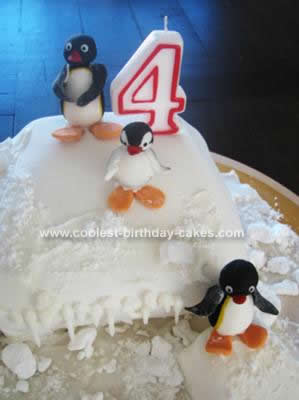 Well, this Pingu Cake Idea was lovingly made for my son’s 4th birthday. I made the penguin figures ahead of time, probably 2 weeks before from coloured plastic icing (Bakels). I had many a PINGU book to study the faces, exact colours, and the positions they stand in. Each penguin has a small bamboo tooth … Read more 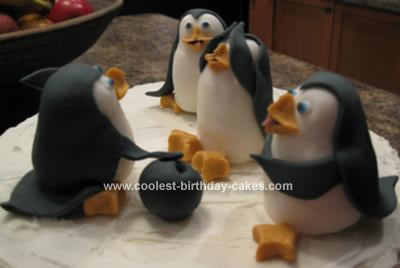 This penguins cake was made for a coworker of mine who loves a good laugh. The cake was a lemon pound cake laced with Italian limoncello, fresh grated lemon peel and fresh squeezed juice. The icing was cream cheese icing and the penguins appeared to be embracing a fun game of bowling using themselves as … Read more 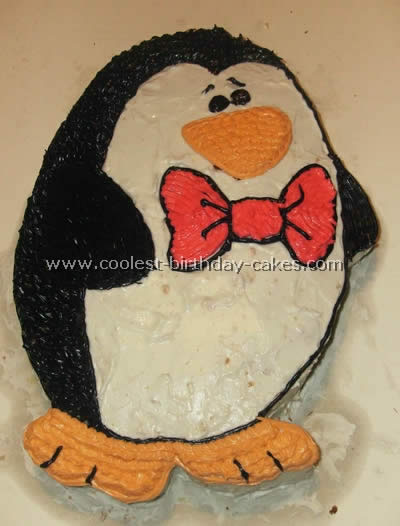 This was my first attempt at cake decorating design ideas of this kind. I made this cake for my friends 22nd birthday. And I thought since she loves penguins I would make her a penguin cake! I started out by making a 13×9 inch cake. I allowed it to cool. I had to enlarge the … Read more 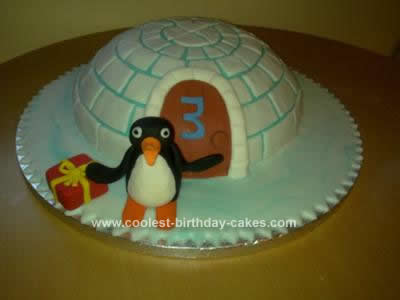 I made the igloo by cooking the sponge in a large metal bowl to avoid carving the shape later. The Pingu Cake was cut in half horizontally and filled with jam and buttercream. I then covered the dome with buttercream and then sugarpaste that I dyed a blueish ice colour. I stuck on the igloo … Read more 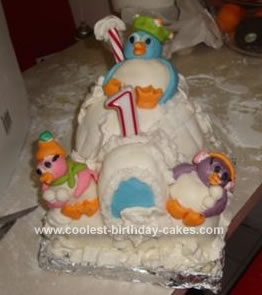 This Penguin Igloo Cake was made for my son’s first birthday, his big sisters came up with the design and helped make it come to life! I used box cake mix, two 8 inch squares for bottom and pampered chef batter bowl for igloo, the door was a chunk of square cake. I frosted with … Read more 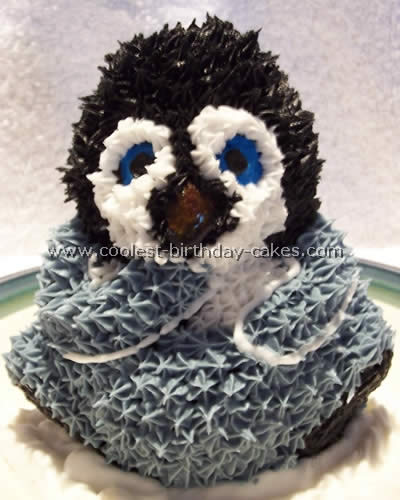 For my sons Happy Feet birthday I made a little Mumble and a Happy Feet scene with blue jello for the ocean. I made Mumble from a small stand up bear cake pan (I cut the ears off the bear to make him a penguin). Then I used a small star tip to make the … Read more 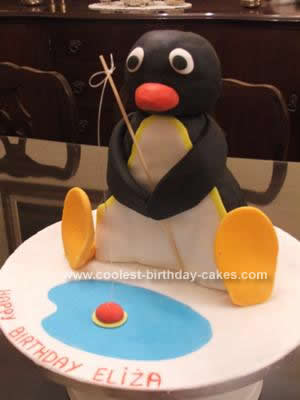 I saw this Pingu Cake Idea on one of Debbie Brown’s books and wanted to do it for my daughter’s 5th birthday because she loves Pingu. It may seem easy but I assure you that it is a quite difficult cake to prepare. First of all you should cover the board with white fondant and … Read more 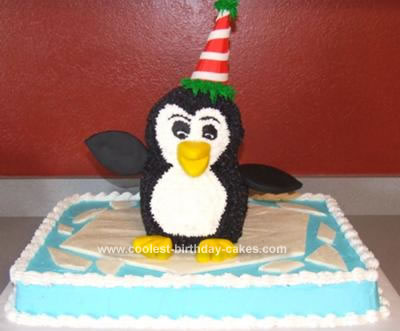 For my daughter Emily’s 8th birthday she wanted a penguin cake. She was so pleased with it and we got so many comments that I thought I would share. A couple days before I made the cake, I made the wings, nose and feet from rolled fondant. I dyed the fondant, shaped the pieces and … Read more 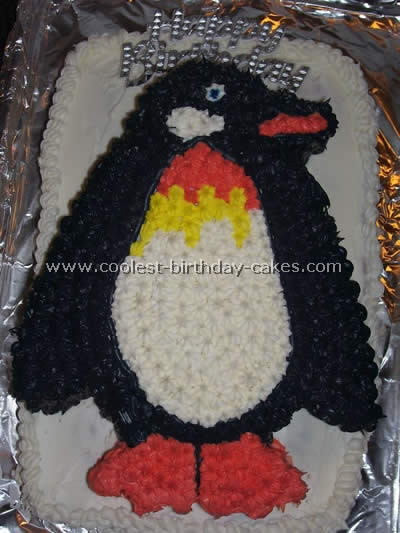 My 16 year old daughter loves penguins. When the movie Happy Feet came out she wanted one for her birthday. I simply couldnt grasp the concept of trying that one so I went to a website that teaches children to draw penguins. I practiced my cake decorating design ideas on paper then when the time … Read more 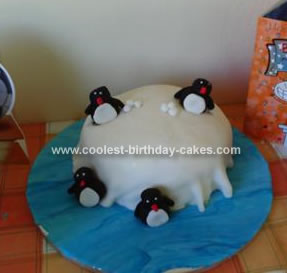 I made this homemade Pingo birthday cake for my husband who likes Pingu. Time was limited so the design had to be basic, quick and simple. The sponge was a 10-inch round cake and I find that just before decorating. I put it in the freezer for half an hour to really chill and this … Read more 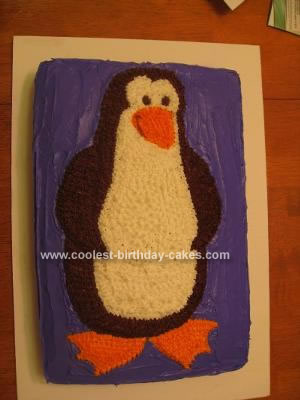 This Penguin Cake was my first time ever trying to decorate a cake like this. A good friend of mine was pregnant, and she loves penguins, so we decided to do a penguin theme for her baby shower. The cake is just two boxes of yellow cake mix, prepared as package states, and baked in … Read more 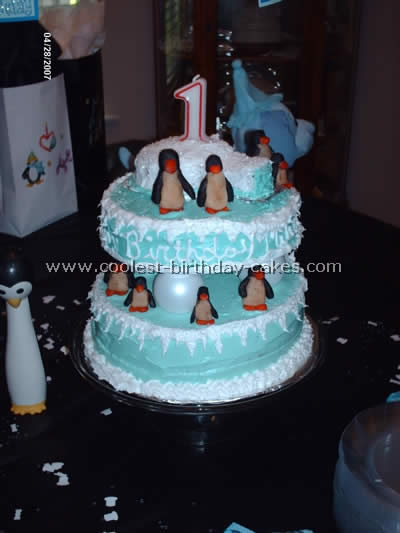 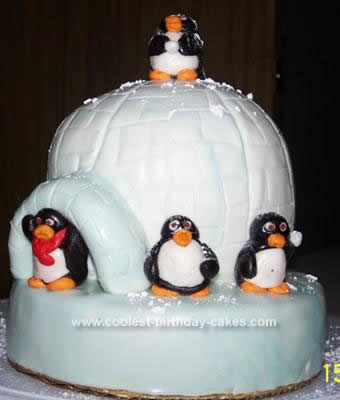 I baked 2, 4 inch round cakes for this Igloo Birthday Cake Design. I over-filled the second one a little bit to make a “Dome” shape, and 1, 6 inch round. I cut out some of the middle and filled it with vanilla pudding. I then crumb coated the 6 inch cake and put it … Read more 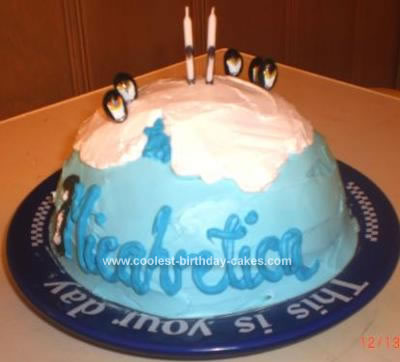 For my son’s 10th birthday I created a Penguin cake, (look under Penguin Cakes) so this year I needed to challenge myself. His Penguin-themed bedroom, claimed Micahrctica (a conjunction of his name and Antarctica) gave me the inspiration. For the cake I used a basic out of the box mix, in a spherical cake pan … Read more 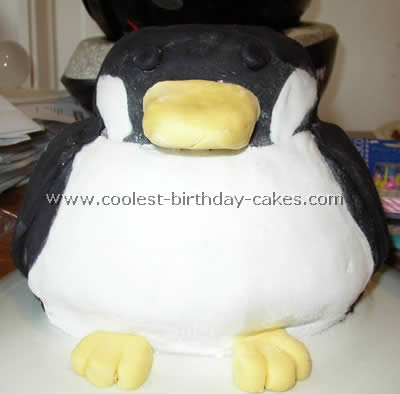 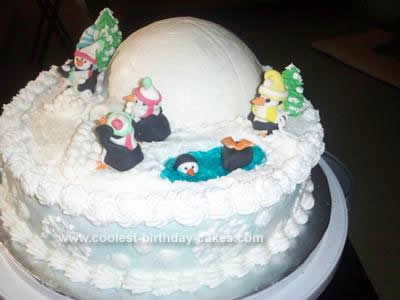 I used a buttercream frosted cake with fondant penguin figurines and trees etc. on this Christmas Penguins Cake. The igloo is the Wilton Ball cake pan and the ball cake is also frosted with buttercream. The pond is colored piping gel. 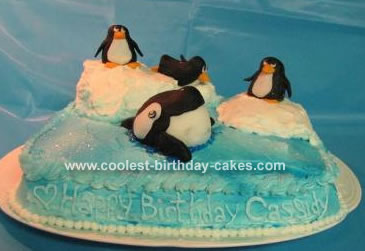 When my 3 daughters had a combined Alaska themed party, I made this penguin one for my 7 year old who wanted penguins on her cake. I used store bought boxed marble cake mix. I used a rectangular shaped pan, about 10 x 8 and a few mini and regular size cupcakes. I iced the … Read more 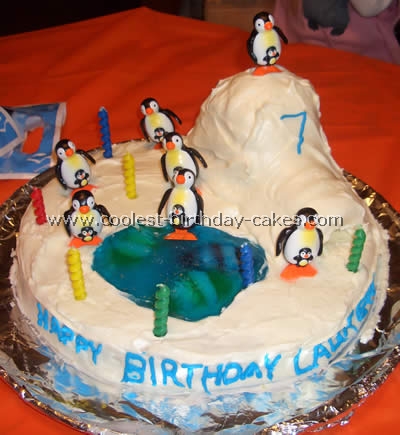 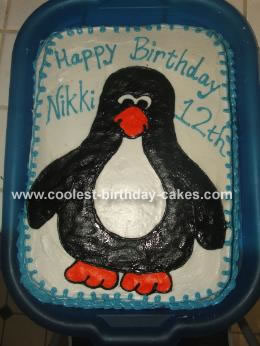 This penguin cake was a birthday cake for a friend’s son who loves penguins. I just took a toothpick to draw a basic shape for the penguin onto a sheet cake. I then outlined the shape in black and filled it in with a small round tip. To smooth out the colors, I dipped my … Read more 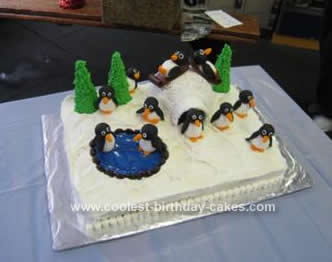 My niece’s 9th birthday was an ice skating party and she asked me to make her a cake with penguins and snow and an igloo. This seemed to be way above the skill level of any other cake I had made her in years past, so after some internet research, this Ice Skating Penguin Igloo … Read more 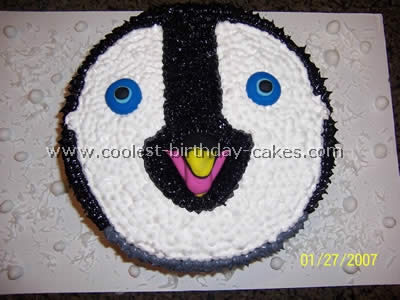 My son really enjoyed learning about penguins in school. So……he HAD to have a penguin birthday party! The Penguin Birthday Cake was so much fun to make and I think it turned out great. To get started I baked two 8×11 cakes. The first cake was the body. I didn’t have to cut this cake … Read more 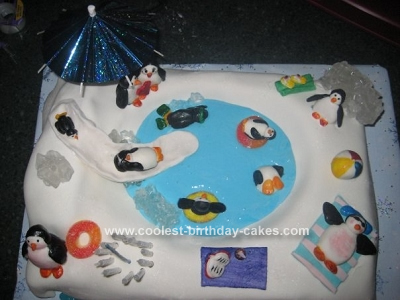 This Penguin Birthday Cake Design was made for a teenage girl who loves penguins. All the penguins are made from fondant and hand painted. The penguin pond is made from melted down taffy and the cake was hallowed out at that spot. For ice I used clear rock candy. It was a chocolate cake with … Read more