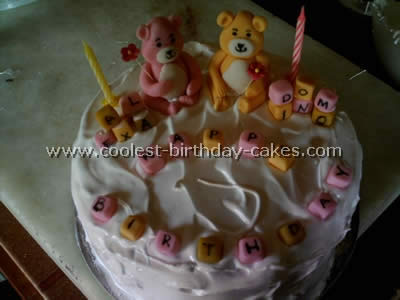 This childrens cakes is for twins first birthday. I got the basic idea from the Jane Ashley Cake book and put my own ideas into it. The cake was a chocolate sponge with American Frosting.

This is a Country Bear cake made for my mom! She loves children’s cakes. Also Polar bears. The Country Bears from Disney and also Willie Nelson – So I made a Country Polar Bear cake for her!

It took several pans to create this children’s cake. I used Betty Crocker cake mixes (Carrot cakes, her favorite). The head is a large muffin/cupcake, the body is Betty Crocker Bake -‘n-Fill (filled with more cake) and the feet are small cupcakes. I used some toothpicks to hold it all together. Frosted it with regular frosting – Dyed some of it blue with regular food dye to make the overalls. Piping gel in black was used for outlines, red writing frosting for the foot pads and ear details. Oh yeah the ears are mom’s favorite mint cookies stuck into the frosting and then frosted over.

The eyes are her favorite candy Whoppers! The buttons are real buttons though I guess I could’ve used just white blobs of frosting there (I think I was going for realism or something!)

The hat is one found at a craft store as well as his balloons. The guitar is cut out of cardboard and decorated to look like Willie Nelson’s beat up old guitar.

My mom absolutely loved this cake. I was so pleased.

A hairy 3D bear cake I created for my son’s baptism. If I’m right, the tip number is 133 for the hairy look (a great result but a bit longer to do though). It is a round tip with 8-10 small holes so when you press the icing, it looks like hair coming out! I love creating children’s cakes!

I used the idea from one of the previous submissions to create this white bear cake. One 8″ round with the center cut out to a 6″ circle for the head and then an 8″ square pan for the body. Cut the ring from the 8″ round for the paws.

Use two cupcakes for ears (rounded side up). Then one cupcake cut off to use the flat part for the nose. I added a chocolate chip in the nose and 2 chips for the eyes. I also added a real bow and used decorator icing for the words and outline.

I like making childrens’ cakes. For my son’s first birthday, I made this Bear cake.

So with some slight modifications, I made this creation. I used two cake mixes. The first, I baked in four greased and floured bake pans: a 1-1/2 quart casserole, a 10 oz. custard cup, and two 6-oz. custard cups. The second mix, I baked in a 7×11 inch pan, and the rest as cupcakes.

Ice the entire cake with brown frosting. Use dark chocolate frosting to draw on the eyes, eyebrows and nose. Cut a bow tie from the 7×11 inch cake. Ice with blue frosting, and use blue sugar sprinkles to add some dimension.

The paw print cupcakes were iced with the same brown frosting as used on the cake. I decorated them each with one Peppermint Patty and three mega chocolate chips.

Read Tracy’s “Party-Tale”: The story behind the cake…

This bear was made using Wilton’s Stand Up Bear pan and decorated with butter cream stars. 24 sports ball cupcakes accompanied it.

Some tips for these sort of childrens cakes are:

*Keep the icing in the fridge until you are ready to use it, if not the stars will not look like stars but like blobs and the icing will run and not look nice. I learned the hard way.

I’ve never used a cake mold to make a cake before; this was all new to me.

This cake was for a small Halloween party at my daughter’s daycare. I used my Stand-Up Pooh pan, but instead of decorating it with the honey pot, I made the belly look like a pumpkin costume and put a pumpkin-themed hat on it’s head.

I love this kind of cake because it’s done mostly with the star tip, which is pretty easy for anyone to work with. It was a huge success! The kids loved it.

I made an 8-inch round cake, cut an inner circle for the face, and cut the outer circle into 8 rectangular pieces. I used only 4 pieces for legs. Then I made a 8-inch square cake for the body and used the 2 muffins as ears, 1/2 muffin (upside down) for nose, chocolate-covered M&M’s for eyes, and coconut mixed with cocoa for fur.

It came out really well. The frosting was not too sweet because I used cool whip and food coloring and decorated and refrigerated the cake a few hours before the party. Everyone loved it.