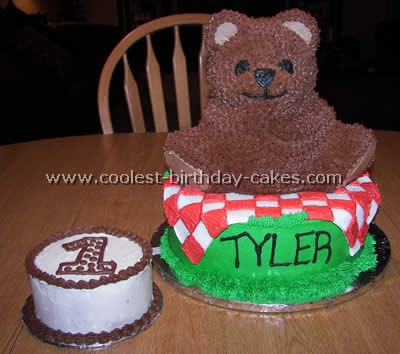 For this cake I followed some very cool free cake decorating ideas. I made it for a friend’s son’s first birthday which was a picnic/outdoor theme. The bottom is a two layer 10in round cake, frosted with green buttercream. The bear is the stand up 3D bear pan from Wiltons, also frosted in chocolate buttercream. The picnic blanket is homemade marshmallow fondant. You can find free cake decorating ideas online as well as the recipe and it tastes much better than the Wiltons pre-made fondant. It is also much cheaper to make than buying the pre-made kind.

I rolled it out to a 10in square and drew a checkerboard pattern with a toothpick before I laid it on the round cake. I put the bear on top. Secured that with dowel rods then decorated the bear. The last part was to pipe in the red squares on the blanket. It was a huge hit at the party!

My daughter wanted to have her birthday at Build a Bear workshop this year so the obvious thing to do for her cake was to make one in the shape of a teddy bear. This was super easy and got free cake decorating ideas from this site. I didn’t have the round pans I needed so I took the handles off my cooking pots and used them to bake in. I used a big pasta pot for the body and a sauce pan for the head. The ears and paws are all mini bundt cakes that I baked in my pampered chef stoneware pan.

The ears and hands are a mini cake split in half and shaped. The feet are a whole mini cake. I’ve seen people use cupcakes but I wanted a fuller look- so that’s why I chose to do the mini bundt cakes. My daughter absolutely loved the cake. It turned out pretty cute.

I made the cake using the Wilton Teddy Bear pan. It is wonderfully simple to use. To decorate, I followed the free cake decorating ideas exactly using the tips mentioned. I used cocoa to get the brown colour, that way it tasted nice too! I made a buttercream icing but instead of 1/2 cup shortening and 1/2 cup butter I used a cup of white butter. For the cake I used a basic oil based chocolate cake recipe. This was my first attempt at cake decorating.

I made two 9″ round cakes for the base and then used Wiltons stand up bear cake mold that is about 20 years old and still works perfectly! I suggest when making a cake like this you insert a dowel rod down through the center because the bear’s head can be kind of top heavy.

In order to decorate, I used the free cake decorating ideas that I got from a friend and used the tip that is made for making grass to make the fur. I made a checkerboard style around the cake because they were having a picnic for her birthday.

I used the Wilton’s big 3D Teddy Bear pan, covered it with BC icing. All color is airbrushed on except for the gold outlines, that is colored BC. The blue in his eyes is blue shimmer dust and there is gold luster dust blown onto his jacket. It really sparkled in the sunlight. I got these free cake decorating ideas from the site!

I made it for my friend’s mom’s 70th birthday. She is wild about Elvis and loved it! I had to give him Blue suede shoes and bordered him with grass. I found a toy guitar to add and the first candle I could grab on the run was the little trophy. Had real fun doing this one and already have plans for the next bear to come alive.

One of my favorites, I loved how he came out so feel free to make use of my free cake decorating ideas. I used a large round pan, some small bread pans, cup cakes, small round pan and a Christmas bell pan for the hat. I bought the frosting for the chocolate but you have to use it when it is cooler or it will ooze and you will loose the “hair” effect. The arms and feet are small bread pans, the nose is a carved cupcake, the ears are also cup cakes, and the hat is a bell pan frosted with whipped cream. I carved the belly to make it round not square on the sides to make it look like a fat teddy bear.

This year I put together some yummy gift trays and included in that was a large one of my famous sugar cookies I hand decorated. I cut the shape out from a picture I found and then free handed the whole thing from there. In the future if I decide to do that again I would not draw the bow tie underneath but fill it in as part of the bear and then tie the real ribbon on him.

I made many of these trays and I think it great free cake decorating ideas for gift trays. I used the cheap cookie sheets that came in the pack of three. It was cheaper then plastic Christmas gift trays and prettier and far more useful than a box. Everyone appreciates a new cookie sheet.

I made this cake for my oldest daughter’s Baby shower. I used a rectangular sheet cake pan for the base. Using a Wilton 3-D Large Bear cake pan (used pound cake for the bear) I constructed the Bear first.

After icing the base cake (double fudge cake with double fudge icing) I positioned the Bear on top and started to ice him next. As anyone knows who has used a “hair” like icing tip – very time consuming – but well worth it for the effect it creates! I used Fondant icing in Pastel colors to make the building blocks for the “Baby Bogue” and then cut out each letter for the congratulations to the parents.

I made the “Baby Bear” Blanket out of individual squares that I constructed and then laid the blanket out in front tucked in to his paw. For the finishing touches, I used a real baby pacifier and balloon. I could have used icing for the eyes and nose but I used plastic ones that I bought at the Arts and Crafts store.

No one wanted to eat the Bear (what a shame to eat him they all said), so my daughter and her husband had me seal him in freezer wrap and will have him ready to eat the night that my grandchild is born! He will be shared with all four Grandparents and Hospital staff to say “Congratulations”.

Thanks so much to this site for all the free cake decorating ideas!

My Grandson Alex had a favorite Teddy Bear that talked, it said “Let’s go to the Zoo there’s lots to see and do….” so I decided to make him a cake just like it. This is a family tradition now as I have made all my grandchildren their birthday cakes over the last 14 years (now I have so many free cake decorating ideas to share). Sometimes the cakes are easy and others become quite hard to make. This one I’m pleased to say turned out really well.

I started by making two Madeira cakes in pudding basins the same size for the body and then a smaller one for the head. When cool I turned one upside down on top of the other and trimmed to fit nice and snug then trimmed the head to the right shape but keeping any trimmed pieces for the ears and feet. I mostly use butter icing to do my cakes as I find it nicer to eat. I colored it with coffee for the main body and vanilla for the tummy. Put a blue ribbon round its neck.

When icing was set and piped the little Bee on after. I will admit I did have Alex’s Bear with me whilst doing this otherwise I might not have got it right but all the family and friends where suitably impressed and Alex didn’t want it cut as it was his Teddy!!

The free cake decorating ideas on this site provided me with lots of inspiration for making this cake. I used a round pan and made a layered cake, iced the cake and placed white fondant over. I used a real teddy bear and placed it in the center front of the cake. Then I rolled out pink fondant in a square and pressed designs. This was so that it would look blanket like and over the bear.

Secure the blanket on the cake with dabs of hidden icing. Just remember with fondant when you drape the “blanket” over the bear do it quick and only once. I had to redo the first blanket I put on because I tried to move it and it ripped. This was made for my sister’s baby shower and everyone thought it was some sort of center piece and not an edible cake!

I made this cake for my son for his 1st birthday party which was monkey themed of course! The cake was baked in the stand up teddy bear cake pan made by Wilton. I followed the instructions that came with the pan as far as how to make the batter. Also, how much to use and the cake itself came out beautifully!

I then just used one of my son’s stuffed monkeys for the face decorating. After the cake was all finished I had the idea to cut the ears off the cake and put them more to the side. And that would have looked more like a monkey! Oh well, the cake was already done!

I froze the cake before decorating and throughout and that made it easier to work with and it traveled well! I got the idea for the leaves under the monkey from someone else who has posted their picture on this site! Thanks for all the free cake decorating ideas shared by people on this site!