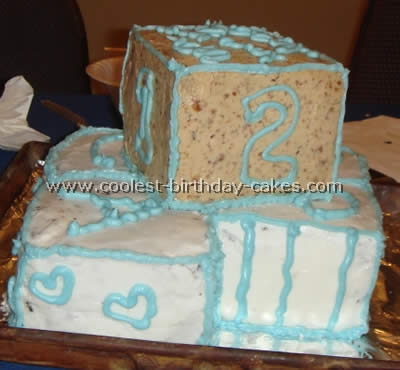 The white cake is buttercream on Hershey’s Deep Dark Chocolate Cake for chocolate lovers. Each block is a double layer of cake with coordinating frosting. We had a large group thus the plethora of cake. I got the decorating idea from a baby magazine and my son’s fabric baby blocks he carried around all day. For the cake I found a childrens birthday cake recipe on the web.

These cakes were for my daughter’s naming ceremony. Her name is Macy. The cakes were 6″ cubes with 2″ letters on each side made from a childrens birthday cake recipe. I made a large sheet cake that was 2″ deep and then cut it 6″ by 6″. Then I piled three of them on top of one another and stuck chopsticks in to secure them. I made the icing really thick to hide any unevenness on the cakes.

The little bear is a Wiltons cake pan mold and I just made a little crown out of icing for her. The cakes were a huge hit! But way too much cake, I sent many whole letters home with people. The letters were cookie cutters that I just pressed into the cake and then filled in with icing so that I did not have to free hand the letters.

Cake by Jessica B., CA

These seemed easy enough but I used whipped cream (which made them delicious but not very pretty.) They were tall and heavy so every time I tried to straighten one side they slide off the other. I used a chocolate childrens birthday cake recipe with whipped cream, raspberry and chocolate ganache. The cakes get a high score for taste but trying to get them square and keep the chocolate crumbs off at the same time and not knocking the top layer off made the appearance only okay.

I made a large rectangle cake from a childrens birthday cake recipe and cut it up into nine individual squares. Each square is covered in a thin layer of buttercream icing then wrapped in colored fondant and decorated with royal icing sprinkles etc. It was pretty easy and can be altered slightly if you know the gender and or name of the baby.

I made 2 square cakes using my own special childrens birthday cake recipe. I stacked them and frosted with one color.

For decoration I used M&M candies and colored sugar. Each side had one of my son’s initials or his age. The top was a picture of a balloon.

I used a white and chocolate marble childrens birthday cake recipe. I used homemade mixes in a 6″ square pan greased well. When cool I cut them in half and filled with icing.

Then I iced a thin lair of icing around the cake. I used a rolled fondant for the outer icing. You can use the rolled fondant you can buy at the store or make your own. You will need icing sugar to roll out the fondant. Keep fondant covered so it will not dry out.

Use cookie cutter’s for the numbers and letters. To make the side strips measure with a ruler. When you are ready to put the strips on, use some icing to attach it to the cake. Let cake set a few hours before putting the top one on. After you put the top on add whatever toy you would like.

For this childrens birthday cake recipe I took a standard 1/2 sheet cake, iced it and graphed out my block lines around the edges for my border.

I used Baby pooh characters on the top and cut 4 cupcakes into squares for my little pile of blocks in the corner. I used icing and a couple of toothpicks to hold the blocks up together

Cake by Robin A., Ashland, KY

This childrens birthday cake recipe are Baby Blocks, each block made with two 6-inch square pans. These were for my daughter’s baby shower. We new she was having a boy and his name would be David “Zane” Crawford, thus the letters on the cakes. I used cake mixes and Wilton’s buttercream frosting recipe.

Both cakes were made in 6×8-inch magic line square cake pans and iced with buttercream icing.

For this baby cake I used a square 12 inch cake, 2 layers. I basically divided the cake into 4 even section and cut the corner block away. I then used the extra square to make the block on top!! I got the idea from another cake decorator on a cake site I belong too!! I iced the entire baby cake with Whimsical Bakehouse Buttercream icing.