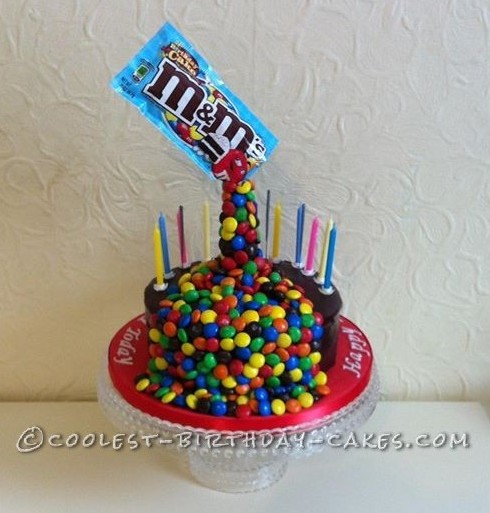 I made this anti-gravity M&Ms cake for my granddaughter’s 11th birthday, so it had to be a little more “grown up” than most of the cakes I have made for her.

The cake is red velvet, a flavour I hadn’t used before, but was so popular that I shall make it again (already had a request for my daughter’s birthday)!

The lettering was done with tappits.  It’s something I’ve only recently started doing.  It takes practice but it’s well worth it.  I put another cardboard circle under the cake board to give it the correct height for the ribbon.

The sweet packet is a real one supported on a skewer.  The stick was covered in chocolate fondant to give the shape.  I thought I would use some of the left over ganache to stick on the sweets.  This was a big mistake.  The sweets just slid off.  I melted some milk chocolate to use as “glue” and that worked very well.

I feel I put too many sweets on – less is more as they say.  I can see all the mistakes (the “glue” shows through and the shape on the stick isn’t quite right), but I got a lot of “wow’s” when the birthday girl saw it and declared it the best cake I’d ever made for her.