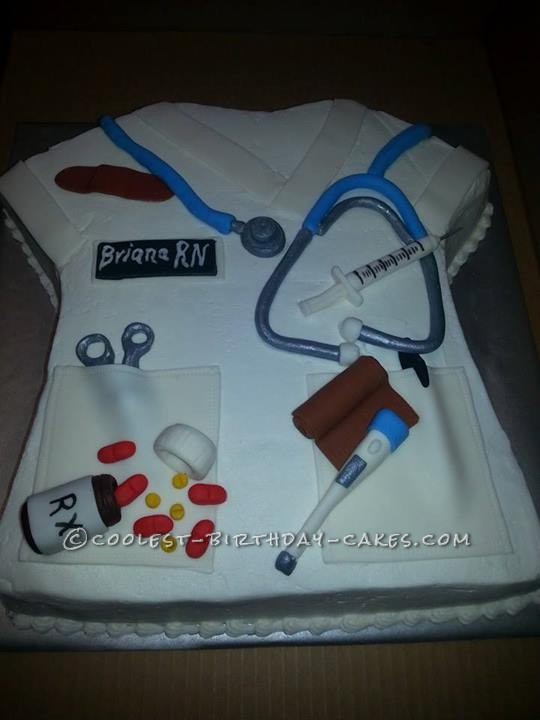 I made this Nursing School graduate cake for my niece who just graduated from Nursing School. First I made the pattern for the shape. I had to measure and make sure the dimensions would fit with the cake pan that I was going to use. Once I finished the pattern I had to start making the decorations for the cake.

I started with the pill bottle and pills first using a mixture of fondant and gum paste, then divided it up and added the colors I needed for the  bottle and the pills, shaped them and then I used an edible marker for the writing. Then I used the same process for the thermometer, bandage roll, band-aid and scissors. The syringe I used the same process except I hand painted a toothpick then let it dry and inserted it into the syringe while it was still soft. I made these items a couple of days ahead so that they would have time to dry. The ink pen, name tag and stethoscope I waited until I was ready to make the cake to do those.

I made and baked a 11″x15″ cake, let it cool and wrapped it in plastic wrap, placed it in the freezer for several hours so that I would be able to carve the cake. Once it was ready I placed my pattern onto the cake and used a very large sharp knife and cut out the cake. Then I used my homemade wondercream icing and covered the cake (in white) and placed it in freezer again to crust up, then I covered it again in icing, repeat this step 3 times.

I smoothed the icing as smooth as possible. I then placed my scissors on one side and made my ink pen and placed on the other side, then I used white fondant to cut out pockets, used my wheel punch to make stitches around the pockets and placed them one each side covering the scissors and ink pen. I then took a small piece of black fondant to make the pin clip for the ink pen. Then I added my pill bottle and pills using some gum glue (gum paste and water mix) to stick them to the fondant pockets. I did the same for the bandage roll and  thermometer. Using fondant I cutout sleever and neckline and placed them on the cake. Made a crease in icing for the sleeves, added the band aid, made the name tag using white fondant on bottom and black fondant on top then I used icing to write the name on the tag.