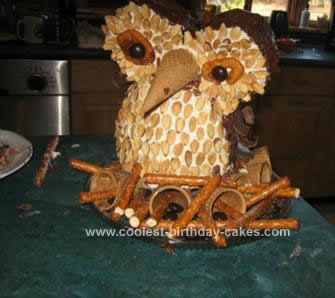 I made this Owl Birthday Cake for my friend on his 24th birthday. This cake took me all day to make but it was sooooo worth it.

This cake is made out of 3 homemade marble cakes. For the head I used a bread loaf pan and for the body a round pan. I put the two round half cakes together and used 2 rods to hold them in place. I frosted the body with homemade chocolate frosting and the front with homemade vanilla frosting (all the frosting is home made). Then I cut out the shape of the head from the bread loaf pan, then frosted it and placed it on the top for the head.

I had to put frosting in between the head and the body to keep them together, also used rods (I have to say the head was the hardest because it kept on breaking in half). Once I got the two pieces together and had them frosted I went and shaved the chocolate for the feathers and put then in the fridge to harden (the shaving took me forever because the chocolate has to be the right temp for it to shave right). When I finished with the chocolate I went and put on the apple rings for eyes then put on the shaved almonds for the feathers on the front for the stomach and face.

For the beak I used a sugar cone and I also used them for the nest (they also held up the owl because he kept on falling over). Also for the nest I used pretzel rods and junior mints for the owl pellets and for the eyes.

The last thing I did was put the chocolate shavings in the back of the owl for the feathers then put it in the fridge so it wouldn’t melt.

I got this cake idea from this website but I did it a bit different from the other cakes, but I bet it came out just as good! 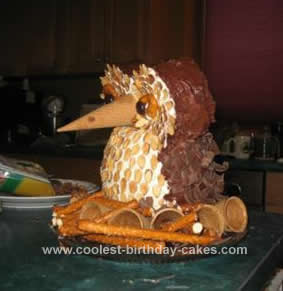 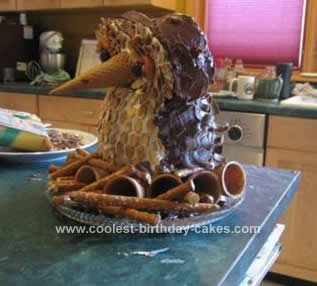 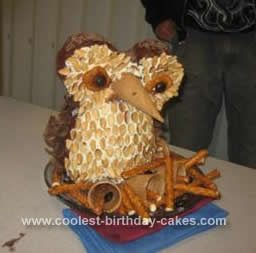