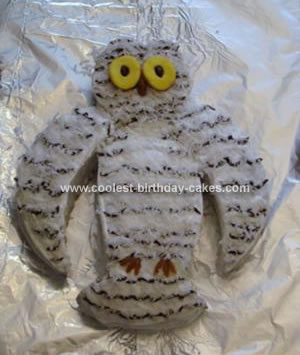 Our one son LOVES Owls! He has a little stuffed snow owl he received as a baby and has slept with it ever since. Personally, I was hoping he would favor his Tigger because if we needed a replacement for “Douglas the Owl” it was sure to be hard. The funny thing is his grandmother passed away before he was born and she also had a penchant for owls and collected them. So this year, out of the blue, he remembered I made them a truck cake last year and asked me for an owl birthday cake. Ummm, sure okay the truck cake was easy peasy pound cakes together but a winged fowl? Okay, sure honey (and remember your mother loves you).

So, I found this site and from here went to eBay where there were quite a few of the same Wilton pans but it wasn’t the right owl. While on eBay I saw an auction for an old 1950’s Baker coconut advertisement. It was hard to see but in the ad an owl cake was pictured! Easy Peasy! All I needed were what looked like 2 round cake pans:) We have those and so I was in business!

Well I had no idea how big 2-9inch cakes are so after they were finished cooking I really had to wing it and change plans at 11:30PM to finish this cake.

The first round I put in the middle of my tinfoil covered foamcore and stared at it. Gathering that the wings and body could be from the same round I made two opposite diagonal cuts on the bottom of the cake / & between them would be the tail or bottom of the body of owl. From there I cut up each side in a ~ pattern so now I had three pieces of the original cake.

I carefully lifted the right piece, flipped it upside down to make the left wing, then followed suite with the other “wing”. Done! Now the second cake round stared at me. Owl needed a head, a small head for a snow owl. So I dug around in my kitchen thing drawer a found the smallest funnel we owned, turned it upside down and cut 3/4 of a circle. At the top I freehanded the ears (which snow owls don’t have but it gave it a little more character, call it my artistic license).

With that finished I used Betty Crocker white whipped whip cream icing on each piece and to “glue” the pieces together. Then I put some Betty Crocker milk chocolate icing in a ziploc baggie and snipped the end and piped the dark lines onto the bird. Afterwards I lightly sprinkled (LIGHTLY) coconut for the feathery look all over. The nose was a single sugar baby candy. The toes were each three slices of a single sugar baby candy. That’s right, teeny, tiny jelly bean sized candy, used a paring knife and the eyes were those round two sided jelly peach flavored rings. I used them yellow side up and glued them down with the chocolate frosting which I also used to fill in the pupils. Voila! It looks just like my kiddos snow owl.

Hoping this helps someone else out there, it really didn’t take long at all.

Next project will be a cow cake for my other son…wish me luck.