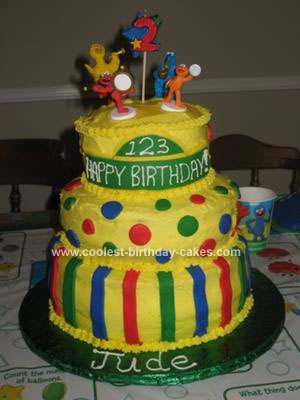 For this cake, I took many ideas from the awesome cakes on this website and then designed my own.

This cake is a three tiered cake with two layers of cake making up each tier. For the bottom tier, I used a 10 inch pan and made a boxed chocholate cake and used a chocolate ganache for the filling. The middle tier is an 8 inch vanilla cake with a bavarian cream filling. And the top tier is a white cake with a lemmon curd filling. I also used four dowels to support the bottom and middle tiers.

The frosting is a buttercream recipe I found online. I then used fondant I bought at a craft store to make the stripes and dots, as I am not brave enough to make my own. I also cut the sesame street sign out of the fondant and then piped my happy birthday message. The cake toppers were bought at a party store.

For the most part, the cake came together fairly easily. The only suggestions I have is that if you are going to use a filling, make sure it is somewhat firm. My bavarian cream was, well, creamy! So, my cakes were sliding around while I was frosting them which made it somewhat difficult to decorate.

This was the first tiered cake I’ve ever made. It took me about 10 hours but I would definitely do it again!

PS- an hour before the party, my son stuck a metal spoon rest through the bottom layer, leaving a gaping hole!!!! Lesson learned: keep some extra frosting on hand. Two-year-olds are very curious!