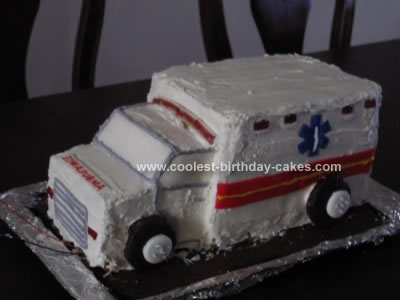 This Homemade Ambulance Birthday Cake Design was made for my nephew’s 4th birthday. Last year he wanted a fire truck, this year he requested an ambulance cake and the whole family pitched in to make it happen.

We used eight boxes of cake mix, store-bought fondant, three jars of frosting, Ring Dings, Twizzlers and some candy for the back lights.

There are four layers, each a double batch which we baked in a 10×14 pan.

After the layers were completely cooled, we squared them off: top and sides. This makes the stack of layers much more stable. We used chocolate frosting between the layers. Then we carved the shape of the cab. Next, we crumb coated the entire cake. We microwaved the frosting a bit. The end result was a super smooth coating. After allowing the cake to set, we frosted the cake (this time without microwaving the frosting first). The Ring Dings were cut in half. A piece of fondant with icing for the lug nuts was attached to each one. The star of life, the red stripes and the windows were all done using fondant.

The resulting cake is approximately 14in long, 6 1/2in tall, 6in wide. We set it on a bed of frosted brownies. The lights across the cab were pulled off of a toy truck and snaked through some clear tubing. The wiring was routed through the cake through a drinking straw that was sunk into the cake. The whole piece was first put into place after the crumb coating was done and then final set after the cake was frosted and before any of the other details were placed on.

Overall, the cake is easy to make. Just make sure to give yourself plenty of time to do it. We spread the work out over the course of a couple of weekday evenings and then a couple of hours on Saturday. But the look on my nephew’s face when he saw his cake was worth EVERY second! 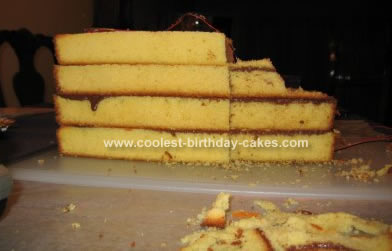 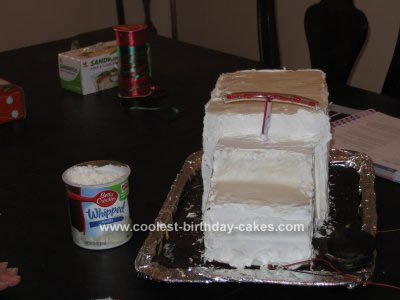 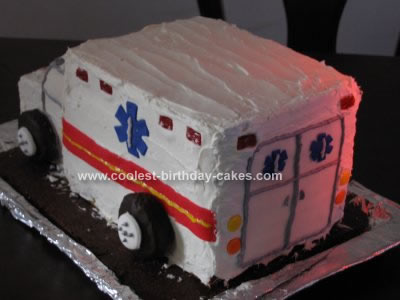