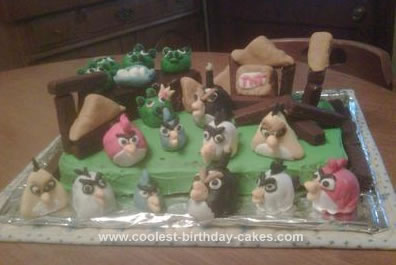 Well, when my daughter told me she wanted an “Angry Birds” cake for her birthday last summer, after Googling for other pictures, I came up with my own take on it, took the better part of a Saturday to finish.

Decided on the number of birds I was going to make, first. I started by making “cake balls” – used a box chocolate cake. Baked it as a sheet cake, let cool. Then crumbled in a big pot, mixed with a can of chocolate icing. Makes it almost like modeling clay. Made the birds (don’t forget the triangle one) and some squares (then cut diagonally for the blocks). Froze them over night.

That night, I baked the foundation. I used a plain yellow sheet cake for the base, made an 8X8 pan of brownies (cooled and cut into an oblong of sorts) for the top part.

I made marshmallow fondant (my first time ever), very easy, and very tasty. Used Peggy Weaver’s recipe. Made blue, red, yellow, white, light brown, black, green using paste food coloring from Michael’s. I should have made the pigs a bit lighter green.

Just roll out the fondant, cover the frozen cake balls with it, and use the colored fondant as modeling clay. For the Itty bitty blue birds, I just made them entirely out of the fondant.

I used chocolate covered wafer bars for blocks as well. Made nest, eggs, and crown of fondant, it molds and sculpts like modeling clay.

Time consuming, but it was very well received by the 12 year olds at her party! The cake balls tasted very good. The only complaints were the little blue birds made entirely of fondant, it was a bit much. 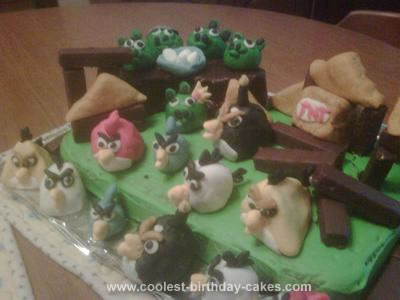 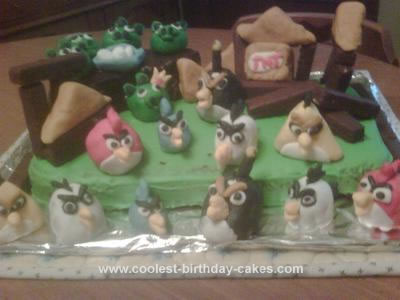