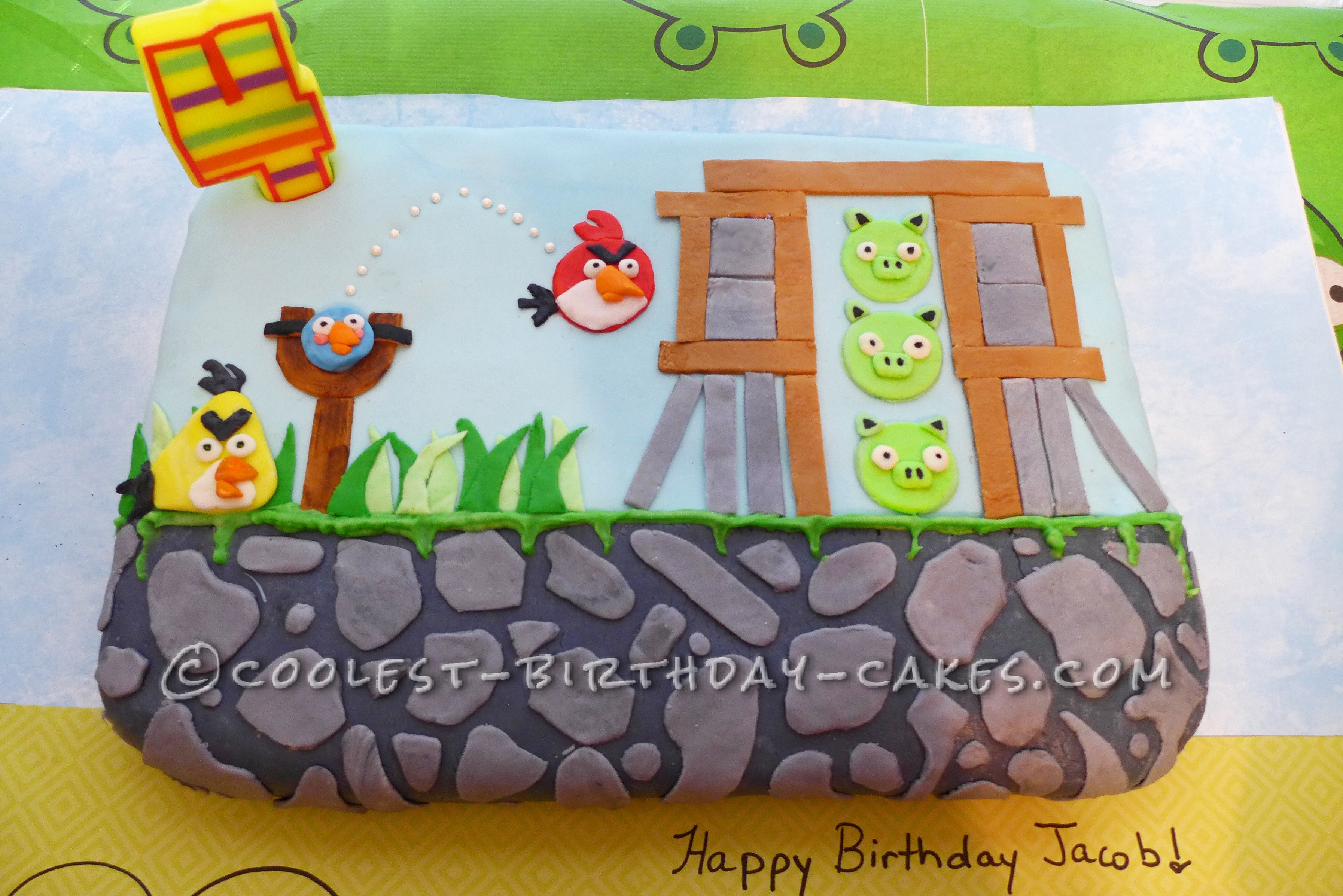 My son has become slightly addicted to the PC version of the Angry Birds game. Knowing how much he loves the game, I decided to make an Angry Birds themed cake for his birthday. I scoured the internet for inspiration and finally decided on a 2-D cake instead of the ever popular 3-D versions, thinking it would be easier.

I made the cake (13×9) and 24 cupcakes a day before his party. While they cooled I made 2 batches of both marshmallow fondant and cream cheese butter cream frosting. After the cake cooled, I cut the top of the cake to make it level and then put it on the back of a canvas (a little unconventional I know). First steps were to cover the cake. The sky blue fondant was super easy. Then for some reason when I tried to make the grey rock colored fondant, the fondant began to crumble. It was just falling apart everywhere! I added a little bit of milk and it recovered enough to cover the cake with, though it was thicker than I wanted.

I took a break until later that night and I came back and started on the rocks. I just cut out random shapes and ‘glued’ them to the cake with a paintbrush dipped in water. Bit time consuming but it worked well. Then I made the metal pieces out of the same fondant I’d used for the rocks. My husband made the wood pieces for me. While he made the wooden pieces I made the 3 pigs. I used the lid of my food coloring pots to cut out the pieces for the pigs and the red bird. I assembled the right side of the cake before I worked on the left side to see how much room I’d have to work with. After assessing the space I’d have, I made the slingshot and placed the red bird near the pig structure. I used sugar ‘pearls’ to make the trail leading the the bird.

By this time it was 2 am so I went to bed. The next morning I finished the cake off with the yellow bird, the blue bird, and the grass. I took a wet paintbrush and went across the cake to remove any powdered sugar that might be left behind. Made the cake a little  sticky though, so probably not my best idea. Then I moved onto the cupcakes. I used 16 cupcakes (the other 8 were found by my 1 year old and had gouges and holes from her playing with them). I made fondant circles for the red birds and pigs. The yellow birds were freeform and the little blue birds were from the dye lid.

Then I realized I had to make 24 eyes for the larger animals. I used the lid of a marker to cut out the eyes and a candy marker to dot the eyes. Then I made all the other pieces freeform. It took FOREVER to ‘glue’ all the pieces on! Worst part of the whole process I’d say. Then I iced the cupcakes and added the toppers and viola – I was done! I decorated the canvas with scrapbook paper just to cover the white board. My son loved it. 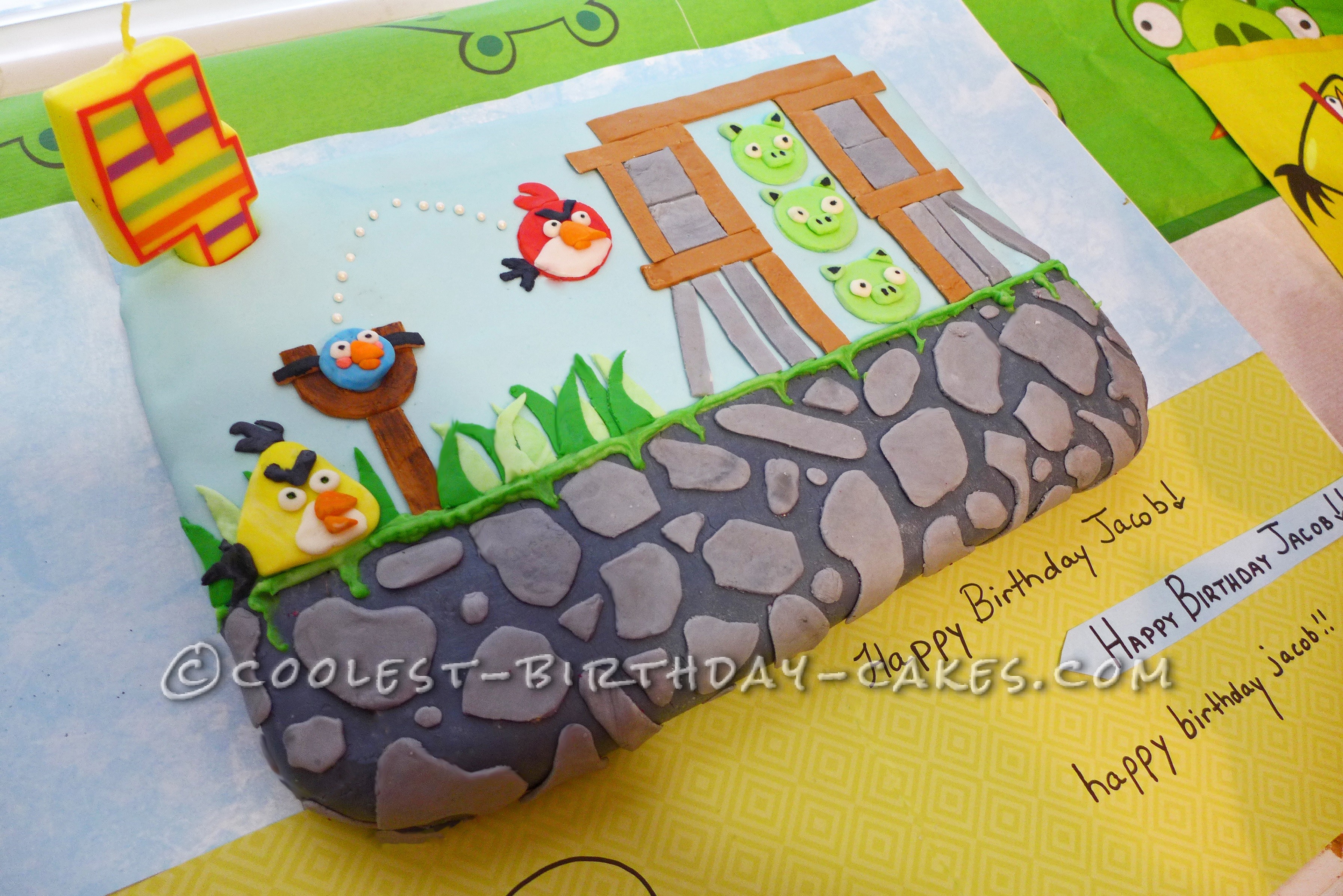 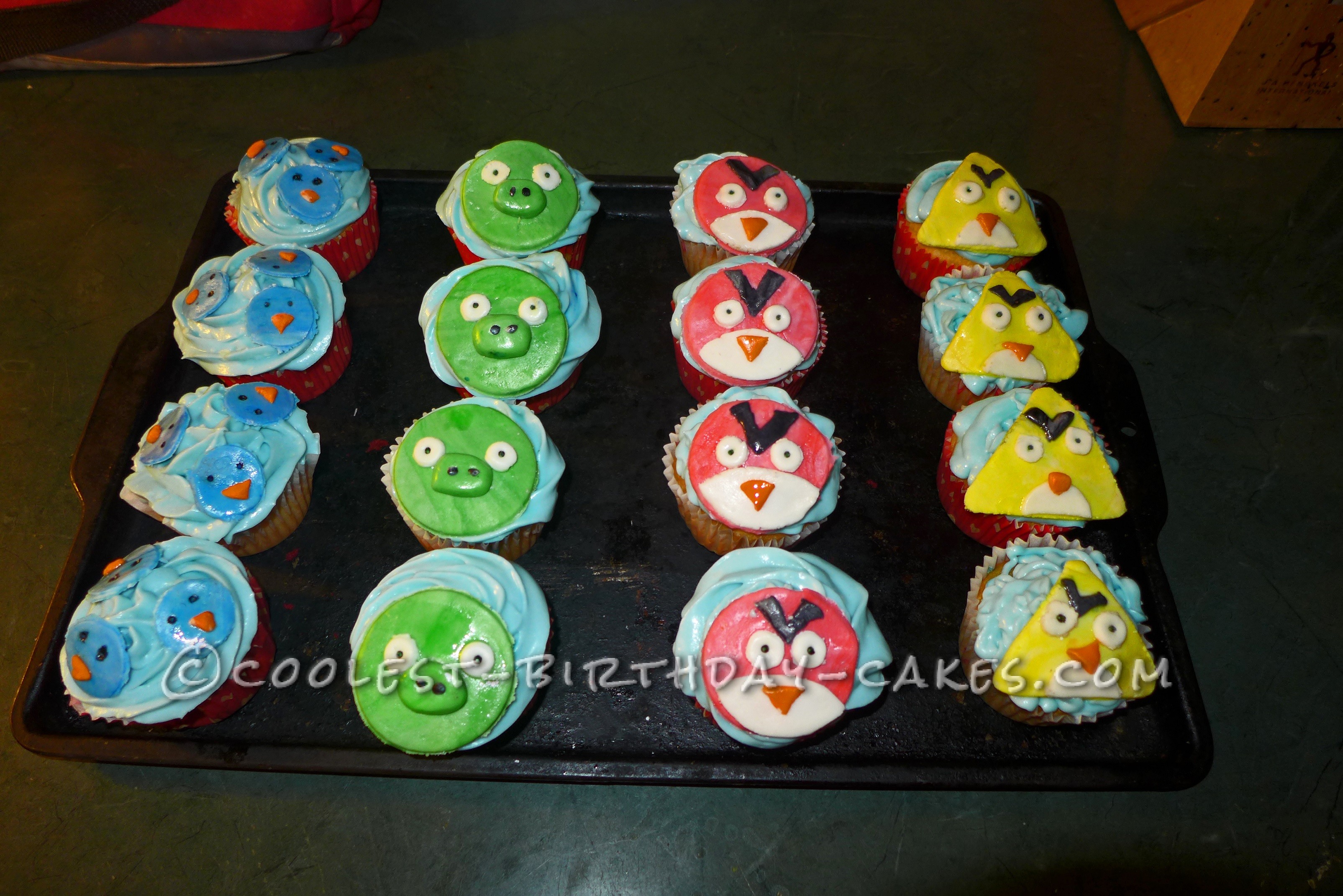 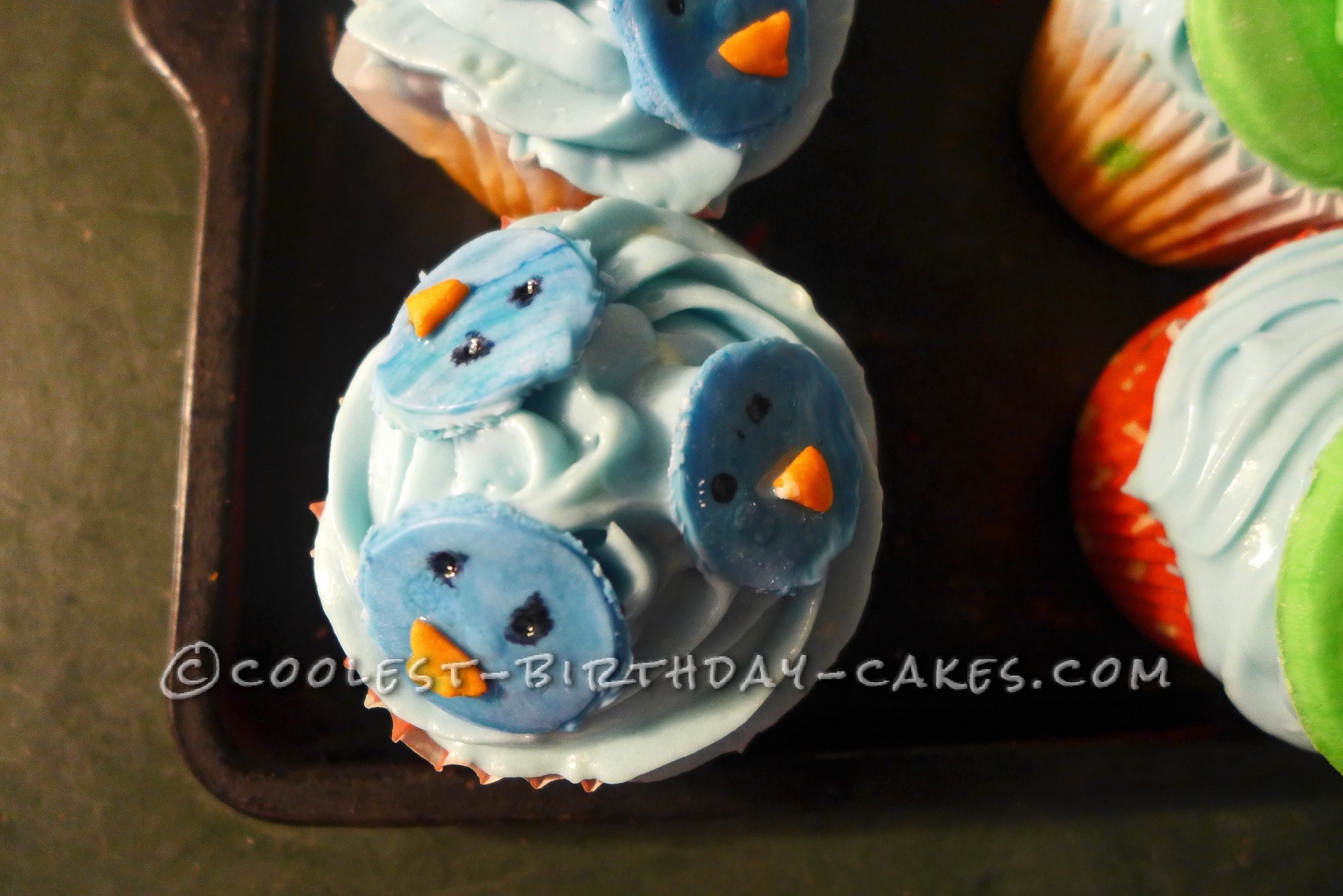 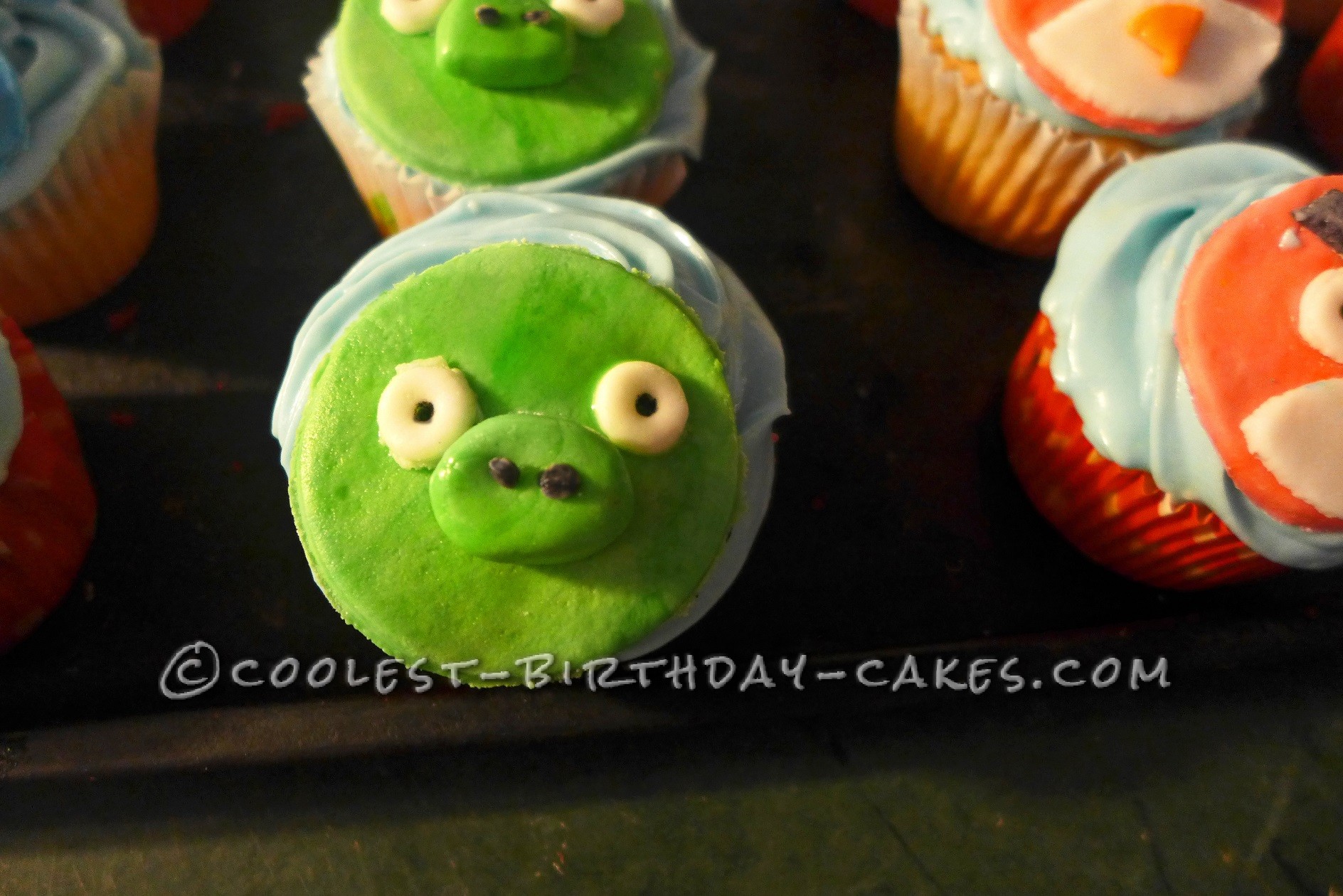 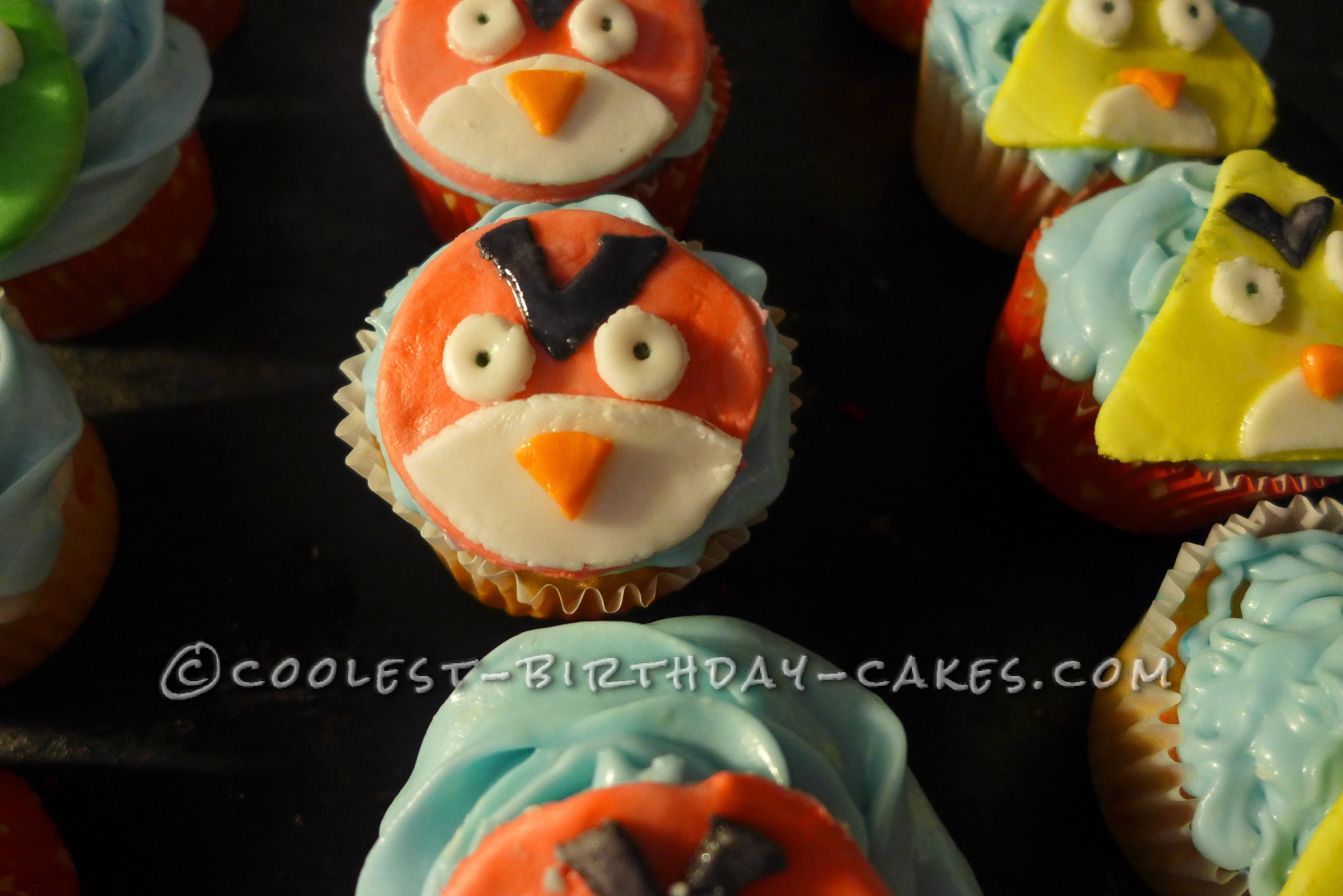 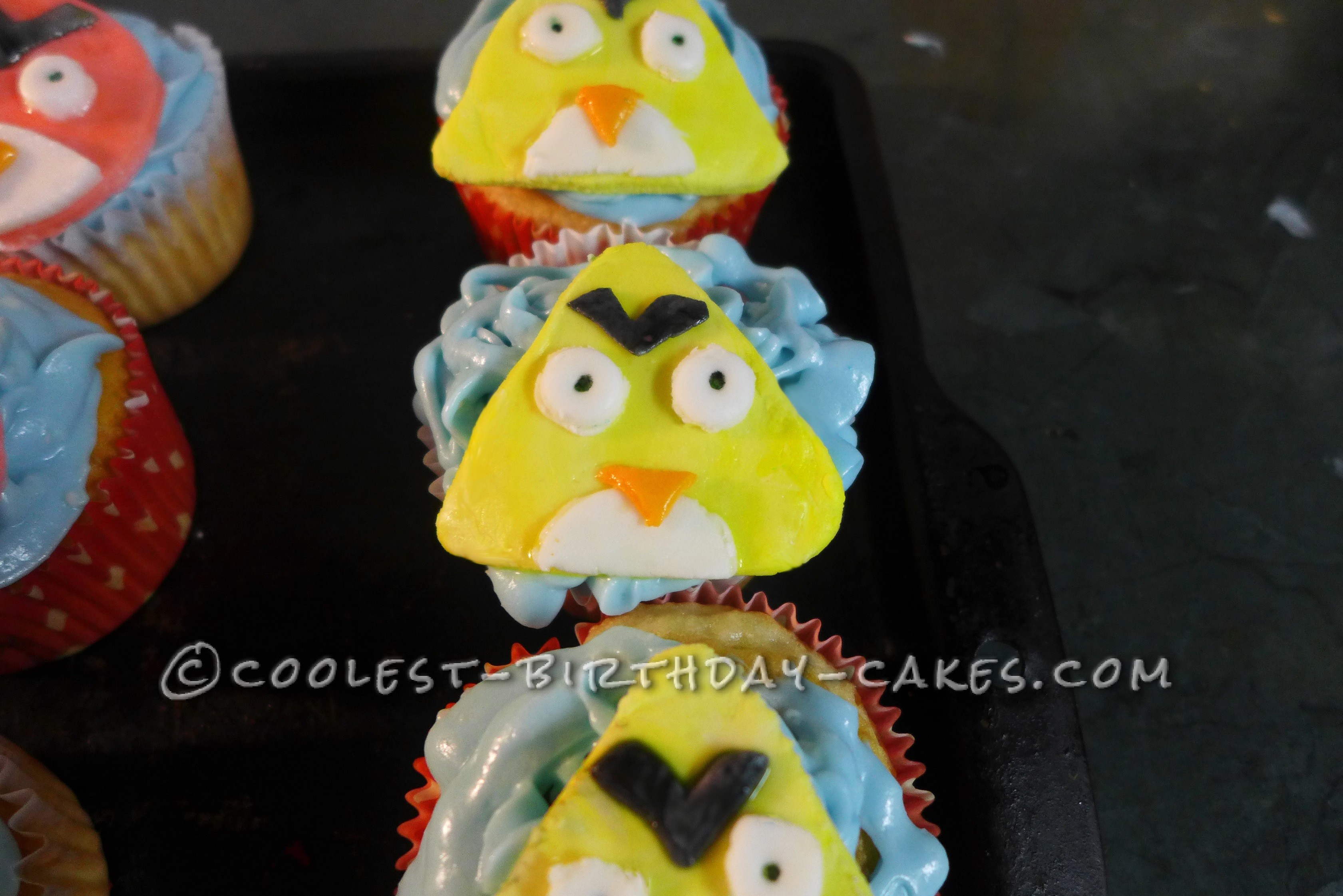