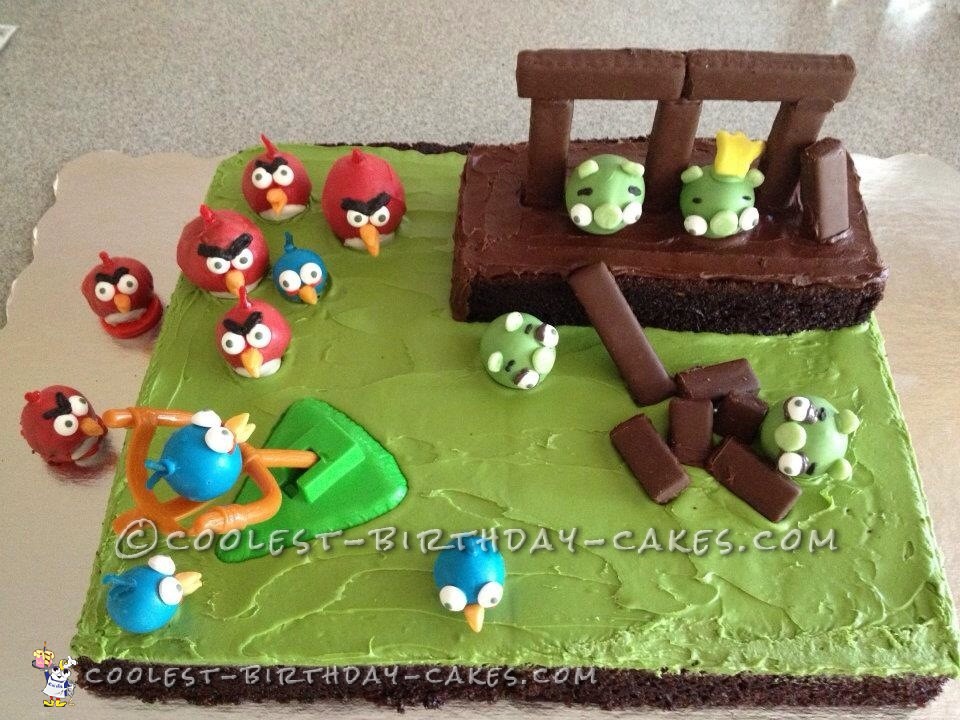 Each year, 14-36 hours before each of my nephews’ birthday parties, I fly from San Francisco to Boston to bake their themed birthday cakes.

This time, the little one wanted Angry Birds. They saw a popular video on YouTube where someone made an almost life-sized, working Angry Birds cake game. There was no way I was going to be able to reproduce that, especially in the less than 24 hours I typically have to make these things. So I looked around the Internet at other peoples’ ideas, including Coolest Birthday Cakes, of course, and came up with my own.

For the pigs and birds, I made cake pops, dipping them in colored candy coat for a smooth surface. If you can’t find colored candy coat/dipping chocolate, you can get oil-based color from the Internet and use it with white chocolate chips, which I did for some of the bird colors.

I used premade candy “eyes” bought from the party store, and applied them just after the last coat of chocolate was becoming tacky.

For the pig nose, crown, ears and bird beaks I used bits of Starburst candies that I microwaved so they would be soft and like play-dough for shaping, using toothpicks and my fingers. For the bird combs and tails I bought colored fruit rope (next to the fruit leather at the grocery store). I let them dry standing in bowls of raw rice to stay upright (I have tried poking them into Styrofoam packing blocks before for cake pops, but I find rice is way easier and quicker).

I just used colored frosting and a fine piping tip for the eyebrows and details around the eyes. My older, Angry Birds playing cousin alerted me that at least some of the pig eyes needed enhancing, to note they’d been partially “hit” in the game, to make it more authentic. So I added that at the last minute – very good to know! I did the white breast on the red birds at the end, gently popping them off the sticks and dipping them in a little extra white candy coat.

For part of the bird structure I started with Keebler fudge sticks and arranged them on waxed paper first. After I got the 2D structure outline I wanted, I used extra cake pop sticks, cut to size, and “glued” them on the back of the 2D shape with melted candy coat and put it in the freezer to harden (I’m working on a time limit, here). Letting it harden by room temperature would have been fine of course. I left some of the cake pop sticks extra long, extending past the bottom of the structure so it could mount directly into the cake.

The rest is pretty straightforward, I used a slab of extra cake I had and frosted it for the base of the pig structure, and the slingshot was just a plastic piece from a board game borrowed from my nephews.

It was a tremendous hit, briefly silencing about 20 four- to eight- year old’s in awe. If you make this, make sure you have enough cake balls for each child – they were shouting requests for which character they wanted immediately after the singing stopped.  Also, if it’s a super hot day, you might want to keep the pig structure in the fridge and add it at the last moment. I have a photo from after the party, after the cake had been sitting out in the summer sun for a few hours. Of course, we still ate it all. 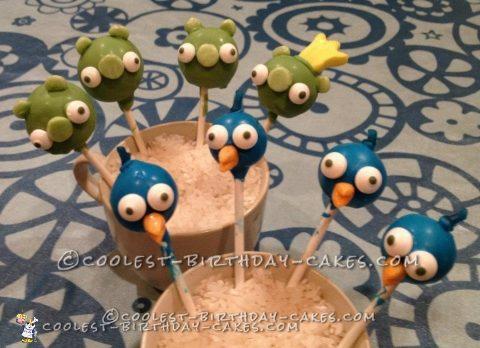 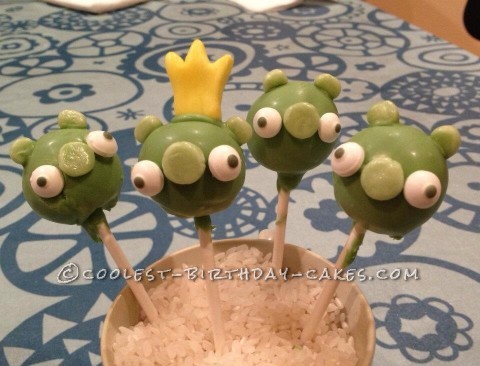 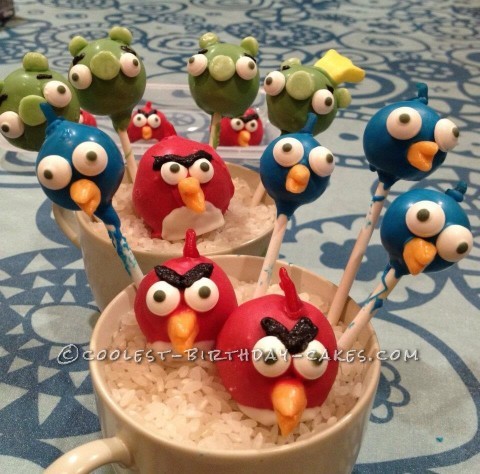 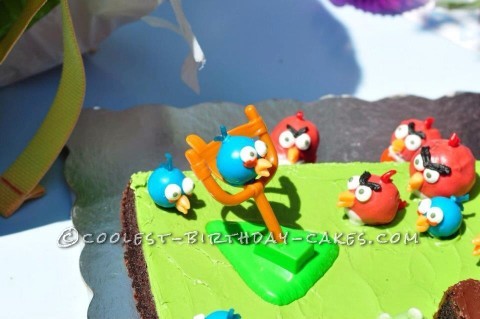 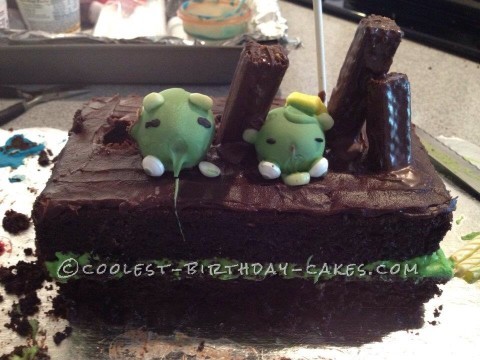