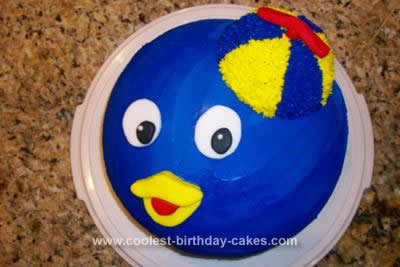 I made this Backyardigans Pablo Cake for my son’s best friend’s 3rd birthday. It was kind of an experiment based on others I had seen online but I think he turned out great!

1) Go to Nick Jr. site and download a coloring page of Pablo. Then enlarge the image on a copier, focusing on his head until it’s about the size of your cake. Cut out the eyes and mouth and use them as templates for the fondant.

2) The cake is two nine in rounds. For Pablo’s hat I baked part of a pound cake (its’ more dense) in a glass bowl.

3) Bake the cake the day before and freeze (it’s easier to cut and ice when the cake is frozen).

4) For Pablo’s blue I used the Wilton dark blue gel coloring. For his hat I used yellow.

5) For frosting I like to use the Wilton buttercream (recipe on their site). Frost the entire cake blue. Place the hat as shown and then frost hat using star tip on pastry bag.

6) Use the templates to cut out fondant for the eyes and mouth. For the mouth I made the yellow two layers to give it depth. The propeller on Pablo’s hat is also red fondant. I used a toothpick to keep it in place – just warn your guests. I usually just buy the white fondant and dye it with the gel colors. Note, this is messy so I usually buy rubber gloves to do the mixing other wise my hands get stained. I stumbled on to this but this seems to work well.

7) It’s all about getting Pablo’s expression right so take your time on the eyes and mouth!

I have not made the other characters but expect I could do so using the coloring templates on Nick like I did here.