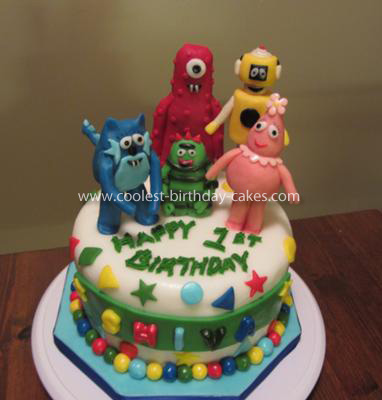 This Yo Gabba Gabba Birthday Cake has all five characters handmade out of modelling chocolate. I used the Wilton melting wafers for the yellow, pink, and red and for the blue and green I had to use oil based candy food coloring to color the chocolate. The melting wafers are great for color but they don’t keep their shape very well in a warm room, I might try adding some paro wax next time. This cake was made with 4 dozen cupcakes as well.

The modelling chocolate recipe I used is 1/3 Cup clear corn syrup to 1 3/4 Cup chocolate (I halved the recipe). Melt the chocolate in the microwave at 30 second intervals stirring well until melted. Color chocolate as needed. Mix in syrup and spread out chocolate onto a plate lined with wax paper. Cover with plastic wrap and let set for at least 2 hours – overnight is fine too.

Muno – the red guy is made as one solid piece, with his arms added on afterwards. For the dots all over him I rolled out a piece of modelling chocolate and used a straw to cut out the dots. Muno has a popsicle stick in each of his legs that extends down into the cake to help him stand and he has another half of a popsicle stick that runs from his head down through his torso to help keep him upright. Muno’s eye is made of rolled buttercream. (fondant would work great too)

Brobee – the green guy is also one solid piece with the exception of his arms. His dark green stripes, mouth, eyes, eye brow, and spikes are all rolled buttercream (fondant). He has one popsicle stick running up one leg into his torso that extends into the cake to hold him in place.

Toodee – for the blue one I made her body first, I rolled her legs onto the middle of popsicle sticks and inserted them into her body, then they also will extend into the cake holding her in place. Her tail is formed around a piece of stainless wire and then inserted into the body. Her arms were added on afterwards. Her light blue coloring, mouth, nose, tail spikes, and eyes are all rolled buttercream (fondant). Her eye lashes were drawn on with a black edible felt pen.

Foofa – for the pink one I made her body first and then added her head sticking it on with half or a popsicle stick. Her legs were formed around the middle of popsicle sticks and inserted into her body, then they will be inserted into the cake to hold her in place. Her arms were stuck on afterwards. Her flower, neck ruffle, mouth, and eyes are made out of rolled buttercream (fondant) and her eye lashes were drawn on with an edible black felt pen.