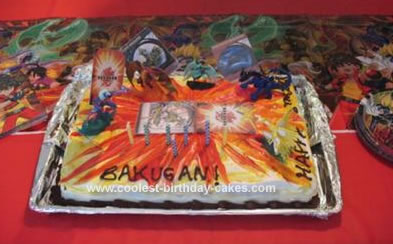 I got my idea for this Bakugan Birthday Cake from the only other Bakugan cake that I’ve seen on this site. But, being pretty last minute, having not done spray icing before (like that cake), and generally feeling a little on the lazy side, I decided to use food coloring with store bought icing. Start to finish 3 hours (baking cake, cake cooling and icing) the night before the party.

I did the cakes one at a time in the oven. FYI: you don’t want to overfill the cookie tray, or it will overflow. Each of my cookie trays took ALMOST the full cake mix-but not all of it. I filled them so that the mix was about 1/2 way up the side of the tray. I guess you could use a 9×13 pan, but the cookie trays made a bigger top surface for all of the decorations.

To decorate the cake, it took 2 Whipped “Chocolate” Icing Betty Crocker containers for the middle layer. The top and side layers took 3-4 Whipped “Whipped Cream” Icing from Betty Crocker containers. I didn’t whip them, that’s the name. I had started to do a first thin layer of the Whipped Cream Icing with the intent of letting that set and doing a second layer with red and yellow food colored icing, that probably would have been easier.

BUT that first layer was covering so well, with no crumbs coming up that I covered the sides and most of the cake with 2-3 containers (I like thick layers of icing). I did kind of a sloppy top layer because I knew that I was going to be adding food coloring to the icing that was on that cake and smoothing it out further into place to get shades of color (like a Bakugan blast). I actually piled the remainder of one container in the middle of the cake.

I added yellow food coloring to the edges and started smoothing out the periphery. Then I added red drops in various separate spots near the middle. I pulled these out to the side with a knife. To some of these spots I added yellow (to get shades of orange). You have to go back and add coloring to areas that look pink (vs. red) and just gently pull the knife out the side.

When the icing started getting too liquidy, I just cooled the whole thing in the fridge for 5 minutes and continued. I used what was left of the chocolate icing to write Bakugan! and on the side Happy 6th birthday Jack. I also piped the chocolate icing around the edge.

I laminated Bakugan cards that I had photocopied. The next day, just before I served it I added two flat in the center (like when the kids play Bakugan) and a few as if they had fallen from the sky. And last of course were a few of the figures that my son got for his birthday.

I think if I had thought ahead I would have painted icing around a few WHOPPER candies or Lindt Truffles as Bakugan balls for the cake. Adding the food coloring to the icing already on the cake was a bit brave, but there were these cool shades of color, like the blast of a Bakugan card, that I don’t think would have happened if I had just spreading red and yellow icing like I had originally planned.

Anyhow, I had fun making this Bakugan Birthday Cake. Everyone ooo’d and ahh’d this cake and it’s fun to watch the wide eyes of the kids at the party. Most important: MY SON LOVED IT. And I have to say that the WHIPPED icing line from Betty Crocker tastes dynamite and it was a good time saver from making my own this time.

As usual, this website is awesome and helped me yet again! I did other cake ideas from this website: Princess Castle and Pirate ship. Thanks!