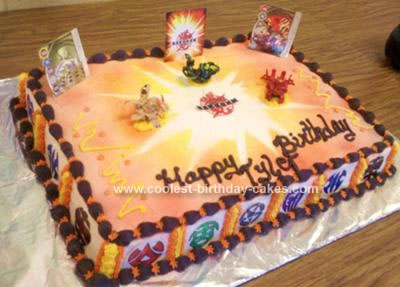 This Bakugan Cake was made for a 7 year old boy and my first Bakugan-inspired cake. The cake itself is a 12”x18” split layer filled with buttercream. After frosting the cake with white buttercream frosting and letting it sit for 15 minutes to crust over, I placed a hand drawn star burst pattern made of cardboard and used decorating spray to create the airbrush effect. I started closest toward the center with yellow, followed by orange and lastly red.

The center Bakugan symbol and symbols on the side of the cake were all traced onto rice paper. Bottom and top borders were created using black tinted buttercream piped with tip 199 and orange tinted buttercream with tip 15. Side pattern made to divide Bakugan symbols made using yellow and orange buttercream (tip 15 in the middle, 17 on the outside). Cake was finished off by adding 3 Bakugan toys and 3 Bakugan cards along with random zigzag design (tip 5).

This cake was definitely a hit with all the boys there!