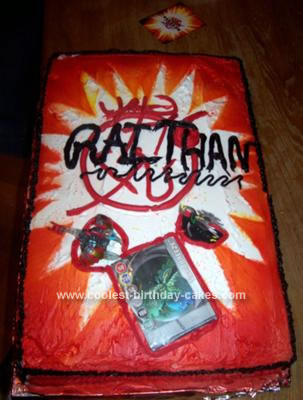 I made this Bakugan Gate Card Cake for my youngest son’s 7th birthday party. I am by far one of the most novice cake decorators you’ll ever meet, but my children prefer homemade cakes over the professionally done ones, so like any good mommy, I try. The cake is 2 9×13 inch cakes laid together width wise. (I used Pillsbury Funfetti at the request of the guest of honor.)

I covered them with a very thin layer of decorators frosting that I bought at Michael’s craft store, making sure that the seams between the cake would not be visible. On top of that is a layer of Pillsbury Creamy White frosting.

I then refrigerated the cake to firm up the frosting while I cut out a starburst pattern out of wax paper. I laid the wax paper out in the center of the cake then used Wilton’s Color Blast food spray in yellow and red around it to try and get a similar color pattern to the gate cards. (I had never used this spray before, but it was surprisingly easy…if not a bit stinky. It smells like real spray paint.)

After another trip to the fridge for the spay to dry, I traced out a circle in the center with red icing and tried to mimic some of the symbol that goes in the circle with the same color. Instead of writing “BAKUGAN” in the center, I chose to write my son’s name in the center of the circle. I used a star tip around the top edges and the corners of the cake in black icing, and used a leaf tip to pipe a red ribbon around the bottom edges.

I added a couple of Bakugan and a real gate card (wrapped tightly in plastic) to the top and traced around the edges with more red icing. It was totally worth the back ache when my son saw it and told me “Awsome momma!”