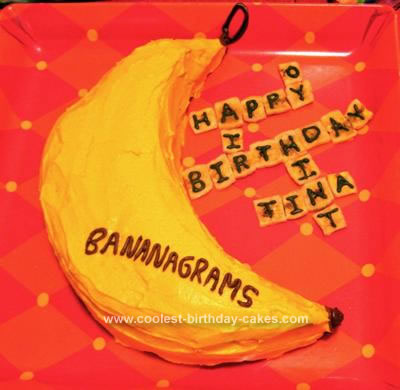 My boyfriend’s mother loves Bananagrams and we play almost every time I am at his home. Bananagrams is a great game to play with the whole family. It is a face-paced thinking game that is similar to scrabble, but much more fun. It comes as no surprise that this game is a favorite of many.

For her birthday I decided to encompass her love for the game and made her a Bananagrams Cake. The cake is two sculpted layers, modeled in the shape of the bag the game in stored in which is in the shape of a banana. The cake itself is a spiced banana cake, which adds to the fun as the cake both looks and tastes like a banana. There is also a layer of homemade chocolate syrup holding the layers together.

Everyone loved the cake, and we celebrated by playing a few rounds of Bananagrams.