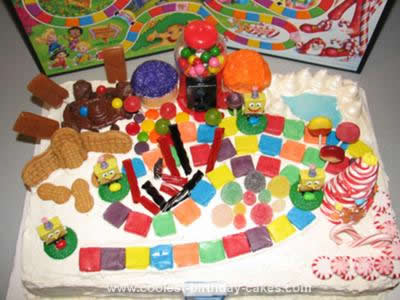 I first saw a Candyland cake 7 years ago in my favorite recipe magazine and really thought it was a cute idea. My oldest turned 5 two years ago and I thought if I ever wanted to make this cake for him, that was going to be my last chance. To make it more “him” I incorporated his favorite cartoon character, we were all very happy with the results! This Spongebob Candyland Birthday Cake was a real crowd pleaser and I received many compliments. Not to mention, my son LOVED it.

To prepare for this cake I took to the internet and actually came across this website and used it for inspiration. I also took out our Candyland board game and looked it over for ideas, I am a very visual person. I have always enjoyed making my children’s birthday cakes so this was really exciting to put together.

To start, I made a list of some very specific things that I wanted to use on the cake as well as some general ideas of things to look for. For example, nutter butter cookies both regular and snack size, small chocolate candy bars, sugar daddy caramel pops, spree, gumdrops and sixlets. I knew exactly what I wanted to use for the frozen lake and remembered eating it as a child. I looked for and found Squeeze Pop Liquid Lollipops at a store here we have called 5 Below, they have a large variety of unique candy.

To top off the cake I used silver edible luster dust that I already had and I also sprinkled it on the white “trees.” I had some other items already in my pantry like chocolate chips, lollipops, ice cream cones colored sugar sprinkles and peppermints. I was lucky in that my son’s birthday is in February AFTER the holidays and was able to find some candy on sale. At first I went to some of the big stores like Target and Wal-Mart but most of their Christmas candy was sold out and broken. Then it crossed my mind to check Walgreens and CVS, they had a lot to choose from and the prices were great!

I also wanted to have a gumball machine and found that at 5 below as well. I found a wide variety of Now & Later candies to use for the game path. I chose them because of the variety in colors as well as size and shape. I tried to stay true to the game board while also throwing in a few other good ideas.

For the base of the cake I used a 9×13 cake pan and baked 4 box cakes (2 flavors) and filled and stacked them. I frosted them with store bought icing to make things easier. As for the character “game” pieces, I found them at Michael’s and decorated them each with a different colored candy. I wanted to use several of the characters from the show but we didn’t have any figures suitable to put on the cake. I only looked at one store for a game that might have the pieces and didn’t find one. I found some online but didn’t want to pay a lot for them just to put on the cake. Now it would be a lot easier as I have seen the games in stores (as well as owning one) now and several toys I would have used then if they had been available.

The only thing I would have done differently would be to plan out the decorating a little better. I didn’t know where to start so I just placed them as I went along. Although it turned out fine, if I were to do it again, I would lay them out off of the cake first for better planning. I might have also added some green icing like on the board instead of white all over. If you decide to make a Candyland cake I hope you have fun doing it. The sky is the limit, be imaginative, be a kid again, it really is a fun cake to make! 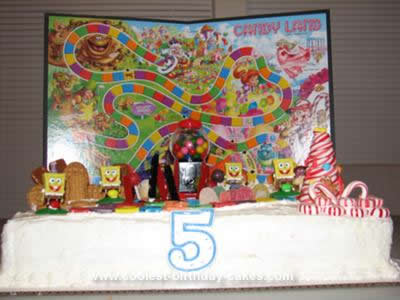 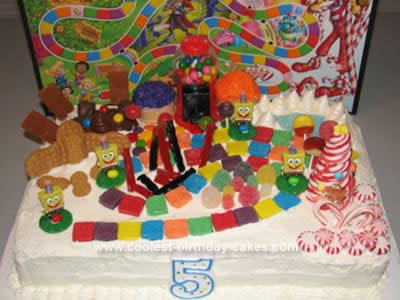 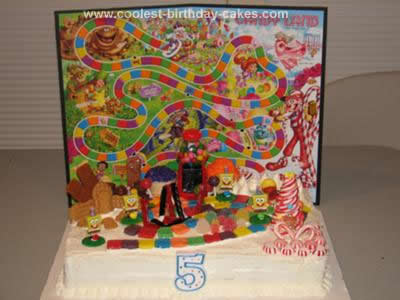