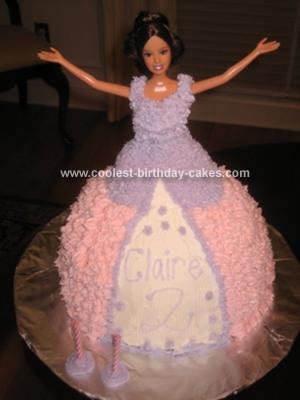 I made a Barbie Birthday Cake without using the Wilton pan for my niece’s 2nd birthday. I found a real Barbie for $4 and undressed her, wrapped her body in saran wrap and wrapped the saran wrap around her shoulder joints to keep them clean when I applied the homemade buttercream icing dress bodice.

I baked one yellow box cake mix with a box of vanilla instant pudding added in a 2 qt. glass Pyrex bowl. The oven temp was 325 degrees and it took over an hour and a half. Just keep checking once you reach that 75 min mark.

The base of the cake is a chocolate 9in layer made from a box mix, but I didn’t use oil or applesauce. I used milk and 2 eggs and added a box of instant chocolate pudding. This made for a dense cake that held up the weight of the full box of yellow cake mix on top! (I froze the other 9 in. chocolate layer for something else.) You won’t have to do any trimming of the bottom of both layers. They were the same size.

I used an apple corer to hollow out a space for Barbie’s legs when it was completely cooled and did it through both of the cakes. Then I wrapped and froze both cakes.

The next day I chiseled a little more cake out around Barbie and ended up having to save those frozen core pieces to build up the dome part around her waist. Real Barbies are VERY tall! Right around her waist is a mixture of icing and cake pieces and I covered that with a crumb coat (and disposed of it when we cut the cake, even though it’s really edible.)

It was very easy to ice Barbie with a crumb coat of buttercream while the layers were frozen. I inserted her and put a rubberband in her hair before I iced it. I used a star tip with pink and lavender tinted buttercream. I ran out and decided to improvise in the back. I figured 2.5 sticks of butter for her dress was plenty!!

It’s crazy how many people loved this cake. It took me about 4 hrs. of assembling, mixing icing and decorating. But it was my first time. You can do it! 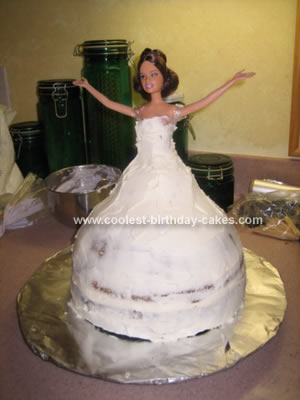 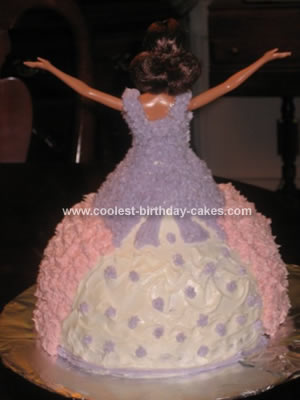