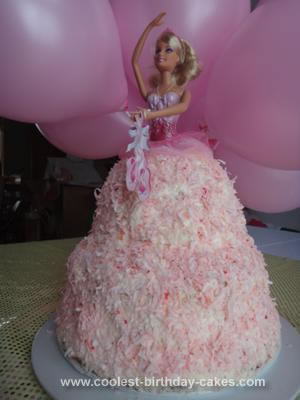 My daughter wanted a “princess-ballerina” theme for her 4th birthday. She is so into ballet and dancing right now! I had seen lots of cool ideas on this site and decided to try my own version of a ballerina Barbie cake.

I bought a ballerina Barbie and because the doll has really, really long legs, I knew I would have to make an extra-high cake. I started off by making the base with a “rainbow” cake mix (white cake with broken up smarties) in a 12-inch pan. Once that was cooled I made a pink strawberry cake in a bundt mold. I used a white cake mix and added one packet of strawberry jell-o, some extra flour, and a pint of fresh sliced strawberries. It came out a little too moist and some got stuck to the bottom of the pan, but it made an extra layer that I placed on top of the base cake. I used the existing hole from the bundt mold as a guide to cut a hole in the base cake.

Then I made another bundt cake, just white with a packet of strawberry jell-o thrown in. It came out really moist and fluffy…a little too much, as it kind of fell to pieces, and try as I might to patch it up, it just fell apart! So I had to throw that cake in the garbage and make another one, same recipe, but less water. I made it in a metal mixing bowl with quite a narrow bottom. It came out just firm enough. I made sure to line the bowl with parchment paper so that the cake came out easily. I placed this last cake (about 8 inches deep)on top of the strawberry bunt cake and made a small hole in the center to reach the other one.

I made some quick lemon pudding (milk & pudding mix, left to set for a few minutes) and put it in a baggie, cut the corner and piped the pudding into the hole to act as “cement”. The pudding was made with less milk than the recipe, to make it a little stiffer. I wrapped Barbie’s legs in saran wrap and pushed her legs into the cake hole, right up to her hips. I held up her tutu with an elastic band so that it wouldn’t get dirty. Then I frosted the whole cake with lots of butter frosting (white vanilla). I colored two bags of coconut flakes with a few drops of red food coloring to make it pink. Before the frosting dried I pressed in the coconut so that it stuck onto the frosting.

This took quite a lot of time, but the result was well worth it, as it gave the dress a tutu look. Finally I put down Barbie’s own tutu and admired the result. My daughter loved the cake and wanted the Barbie right away (she even slept with her that night!). Everyone at the party was blown away by the cake and I was really happy with the look of it. It tasted great too, with a beautiful deep pink color. Putting jell-o powder in a cake mix is a great idea. I wonder what my daughter will ask for next year??