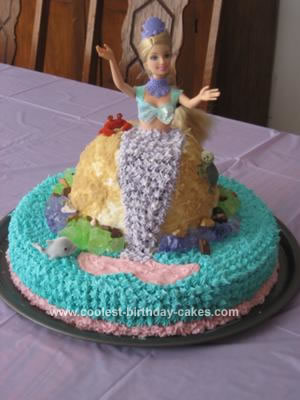 My daughter loves Barbies and mermaids so I decided to make her a Barbie mermaid cake for her birthday. I started by making the cakes the day before the party. There are two layers to this cake. The bottom layer was made in a 12″ round pan and the dome shaped layer was made in a pampered chef 2 quart batter bowl.

The bottom cake required 7 cups of batter (almost 2 whole cake mixes) and the dome layer required one cake mix. I baked each layer separately. Both were baked at 350 degrees. The 12″ round cake took about 40 – 45 minutes to cook and the dome cake took almost an hour. After cooking for 35 minutes, I just kept checking on each cake every 8 minutes or so.

After they had cooled, I wrapped them up and put them in the freezer overnight. I also prepared the icing the night before and refrigerated it. I used the Wilton icing dye (teal – for the water and violet – for the mermaid’s tail).

The day of the party, I iced the bottom layer with white icing and put the dome layer on top. Next, I dug out a small hole for the barbie and put her inside. Next, I iced the dome layer with white icing. I put the cake back in the fridge for about an hour so the icing would get hard. After an hour, I began to ice and decorate the cake. First, I put another layer of white icing on the dome cake. Next, I used a toothpick to outline the mermaids tail and fin. Then I patted brown sugar all over the dome cake (except in the area where I was going to ice the tail). I then put the purple icing in the icing bag and used a star shaped tip to make the mermaids tail. I just used pink icing to make the fin. I also put little pearl candies all over the mermaids tail.

Then I began to ice the bottom layer. It is the teal icing using a star shaped tip. You could also just ice it regularly if you don’t want to take the time to make all the stars. When this was done, I put rock candy around the dome layer and I sprinkled chocolate rocks over them. I also found some miniature sea animals (Polly Pocket brand) at Wall Mart and I put them on the cake.

It was a big hit and my daughter loved it! 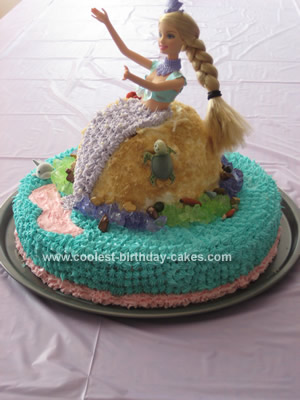