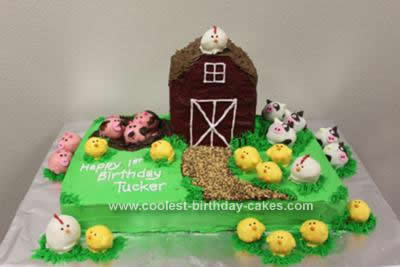 This Homemade Barnyard Birthday Cake was made for my co-worker’s son’s first birthday. They live on a farm and he LOVES animals so we knew right away we wanted to do a barn yard cake.

The base of the cake was made with two cake mixes in a 10×15 cake pan. This was a marble cake. The barn was constructed out of stacked pieces of cake made out of a 9×13 pan. This was a yellow cake. All the animals are completely edible as they are cake balls. Each animal was a different flavor. The pigs were strawberry cake balls. The chicks/rooster were white cake balls and the cows were chocolate cake balls.

The cake balls were made with the standard cake ball recipe:

¾ can of readymade frosting (I used Pilsbury)

Break the cake apart and “smush” it together with the frosting.

Roll the mixture into balls and chill until firm.

Dip in candy melts or melted almond bark and decorate

I used candy melts to cover the cake balls and then I used a variety of “sprinkles” for the decorations:

*The rooster’s red feathers on his head were heart sprinkles

* The beaks were orange/yellow rainbow chips

* The pigs noses were pink M&Ms

* The feet on the chicks were orange daisy sprinkles

I made the barn as a removable “smash cake” by putting a small cake separator underneath the cake and held it up with dowels so it didn’t sink into the grass base as the barn was very heavy. The pathway going to the barn was “Turtle Crunch” from Wilton. All the frosting was homemade crusting cake frosting.

This was probably the most time consuming, yet fun, cake I have ever completed! The birthday boy LOVED his cake and was COVERED in it! (barn as his “smash cake”) 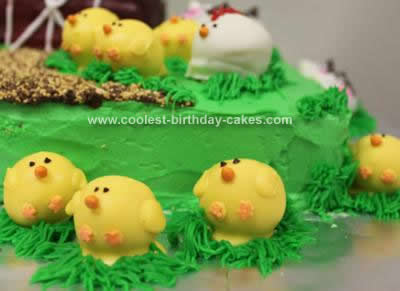 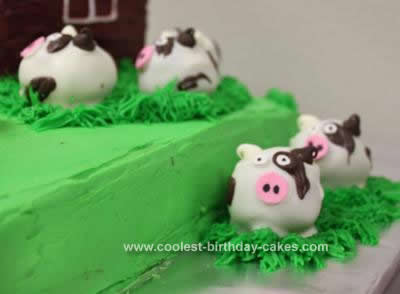 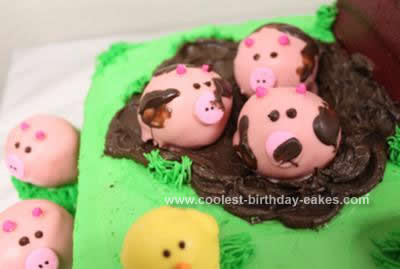