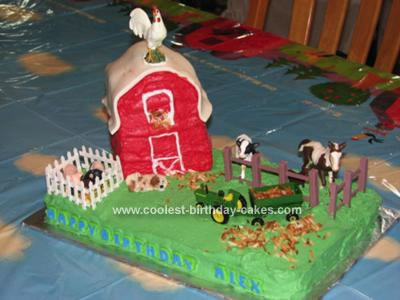 After finding farm birthday decorations online, I decided my mother and I (mostly my mother) should take on a barnyard cake complete with a 3-D barn for my son’s 3rd birthday. We could have used a little more practice on the barn itself, but after all our hard work, I think the end result wasn’t too bad and maybe someone else can benefit from where we went wrong.

We started with two 9 x 13 cakes. We used one of them as the base. The other we cut into 4 equal sized squares. Three of the squares were used as the body of the barn. The third square we cut into 3 equal rectangles, leaving 1 rectangle as the middle of the roof and then slicing the corners, one corner off each of the side rectangles lengthwise to make the roof slant.

We covered the base with green frosting, used plastic animals and fencing and added some brown frosting in the pigpen. We toasted coconut to make the hay and used food coloring with coconut to make feed for the pigs. (Follow the directions on the coconut package to get the best results.)

The barn was covered in red frosting and the roof is made of gum paste. We drew the doors and window on the barn with white icing. We used several lollipop sticks inside the cake to support the layers of the barn.

Our biggest challenge was getting the green and red icing colors to be the shades we wanted. In the end, we used Wilton (No taste Red) gel food coloring and separated our frosting into several smaller batches, achieving the color we wanted in each small batch and then mixing them all together. It took a LOT of red to get the barn truly red. For the green, we used regular food coloring drops, but found that mixing yellow and blue worked better than just using the green food coloring. Again, we mixed that in smaller batches first.

In the end, I think we would have either needed a smaller barn, bigger base or wider barn to make it more proportional, and we never could get the roof quite the way we wanted it, but my 3-year-old was pleased and that was the whole point. 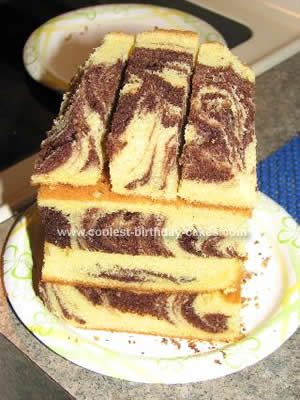