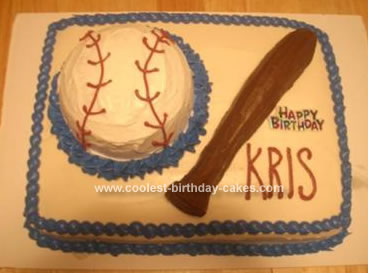 My friend wanted a baseball cake for her son on his birthday. I’ve done this cake several times before but I usually decorate it as a basketball. But this time I decided to make a bat to go along with it, actually that was my hubby’s idea, Thanks Lance!)

Anyhow, the ball and bat are both made with rice crispy treats just formed into the desired shapes, very easy! After rice crispies are formed and hardened ,I decorated them with buttercream icing. White for the ball and chocolate icing for the bat.

The cake is just a triple chocolate cake with white buttercream icing. I piped blue dots around the cake so it didn’t look so plain. I used a Happy Birthday sign on the cake so I didn’t have to write a lot on the cake since I took up so much room with the bat and ball. But I did write my friend’s son’s name in red just to add a little more color. And I also used red on the baseball to give more detail to the ball.

This Baseball And Bat Birthday Cake was very easy to make and it turned out really cute!!