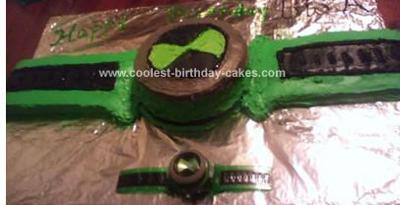 My son wanted a Ben Ten Omnitrex cake. I thought real hard about making this cake but it was very simple. I used two round cake pans, 1 metal and 1 throw away. The throw away one was a little smaller and that would be for the top part of the cake.

For the watch band I used 2 small throw cake pans and just cut them on an angle like the watch band was! I used white icing and colored it with green food coloring. The black icing was the kind that comes in the tube and the grey was black tube with a little white icing.

This cake went over great with all the children that were there and the decorating part was not as long as I thought it would take, maybe two hours all together!