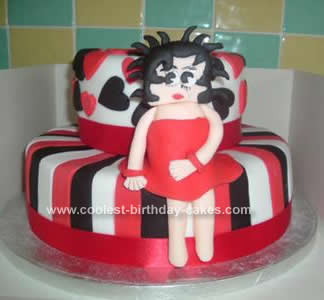 I made this Homemade Betty Boop Birthday Cake for my friend’s 30th birthday last week – she is Betty Boop mad!

Both cakes are sponge – the bottom a 10 inch round and the top a 6 inch. I coated both cakes in one layer of butter cream (and then put them in the fridge for 20 minutes so this would harden a bit) before adding a second layer to ensure that there were no loose crumbs when I did the royal icing.

I had seen a white, red and green striped cake (designed as a wrapped present with a bow on the top) on the internet and wanted to try the icing technique out for myself so thought that the red, white and black of Betty Boop would work well.

I started by making a greaseproof paper circle the same size as the cake which I then folded into sections so that I could put a pin in the middle of the cake and then mark four quarters. I started by laying one red stripe at each quarter mark and taking it from there. As I lay the next stripe after the red and towards the center pin, I marked the strip of icing with a ruler before removing it from the cake to cut, and then placing it back and securing it with sugar glue. (Next time I would like the stripes to be a more similar thickness – for some reason, one batch of white was much thinker than the rest meaning I had to re-roll and still got a slightly uneven cake!) I hope that I get a bit quicker next time too, these stripes took me 3.5 hours.

The hearts for the second tier were much simpler – I just used three different sized cutters and sugar glue to secure them.

Making Betty was a bit more difficult though! The body was easy enough – I used ready coloured sugar paste to mold the body, arms and legs and then wrapped some ready coloured red sugar paste around them to make the dress. I then sat these on upside-down plastic tub, propped up with a tin can to create the sitting position and left to harden and started work on her face.

The shape of her face and her hair were OK to make, although I did make two heads so that I could pick the best one to use! But, I struggled a bit with her eyes – I think they (along with the hair) are what makes Betty so recognizable. In the end I cut small white circles and small black circles from ready made fondant and cut away some of the black to create the actual shape of the eyes.

I was pleased with the end result, and my friend loved Betty and had an amazing birthday party. 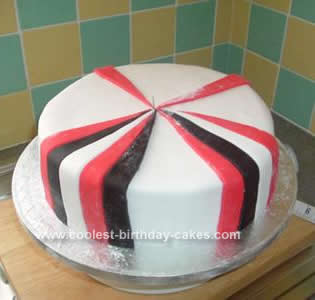 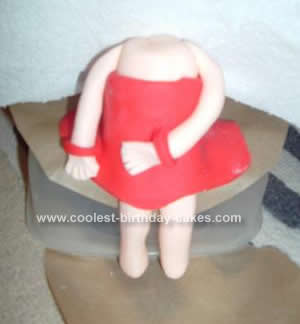