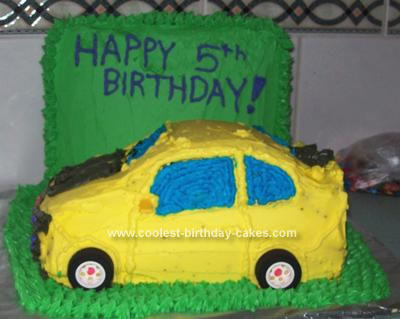 I made this Car cake for my son’s fifth birthday. He had requested a Transformers cake but I figured that making a car would be easier than the robot. A 5 year old can still be convinced that a car is just as cool; well, at least my son can!

To make the cake I made two sheet cakes the day before the party. I froze them overnight to they would be easier to work with. I cut both cakes in half. The car is made of two half-cakes and then the back is another half-cake.

It is completely iced with thick buttercream icing. I made sure that, the whole time I was working with the cake, it was frozen, so it had to be placed back in the freezer a few times.

Instead of trying to make wheels, I took some from my son’s lego kit and just washed them really well.

I made the car before I made the background. Because the car looked a little lopsided, I added the background to try and distract attention away from it. I had lots of extra green icing so I piped green color for the grass around the car. According to my son, it’s Sam’s backyard!

My son loves it. Its the first cake I’ve ever made into a shape and not left as a sheet. It really wasn’t that hard at all!