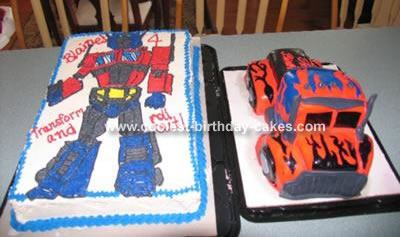 I made two different cakes for my sons 4th birthday. One cake in each mode of Transformers Optimus Prime cake.

The first is just a large sheet cake. My son picked a picture of his favorite character and I drew the figure on the cake with a tooth pick and then filled the colors in according to the drawing I was copying.

The second cake was the semi and I baked a large sheet cake and let it cool in the freezer. Then I cut it in fourths and carved and stacked until I got the right shape. Then I frosted the whole thing together and let that sit. I colored fondant and rolled it out and placed it on the cake and cut it out accordingly.

For the flames in blue I used blue food coloring and painted them on. For the other things such as a grill and tires and the exhaust stack I just formed then formed them from more colored fondant.

Both cakes took about 8 hours total to make and were fairly easy. They would have been easier without the 10 month old hanging on my the whole time but such is life! Hope you have trying these!