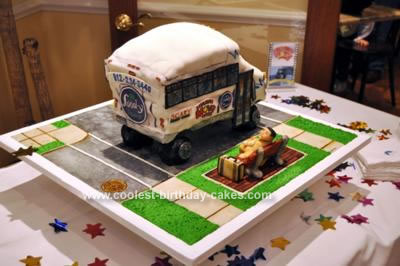 I was approached by a friend of mine to make his 5th Anniversary Cake for his business. He told me he wanted his tour bus with Forrest Gump sitting waiting for the bus. I told him I would see what I could do for him. I started with a wood base 24 x 24 I covered that with contact paper. I drew the base on out on paper so I would have a reference point. I put four dowels into the board to support the base. I then covered the base, expect for “grassy area” with fondant. I “painted” the fondant with icing paste and set everything with a shifter full of powder sugar and brushed off the excess.

I used royal icing to create the grass. I flooded the area and then used a fork for texture. I made Forrest out of tinfoil and fondant and painted him the same way as described above.

The cake consisted of 4 cup cakes and 1 9×13 and 1 8×8 sheet cakes (I then made six cupcakes with the left over batter.) I was a basic yellow cake with butter cream frosting covered in fondant (for the record I wish I would have made two batches of fondant cause I almost ran out for the bus.) The cake was built on top of a base that was placed on 4 pegs, the pegs were first covered with the cupcakes and fondant. There were 2 pegs to support the cake itself. The decals were all gum paste painting with icing colors. The decals were then adhered with “gum glue” gum paste plus water. The racing strips on the bus were also painting with icing colors.

The bus cake was a huge hit and survived transport to the party. It by far was the biggest cake I have ever made. 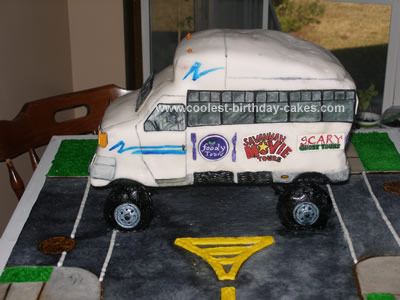 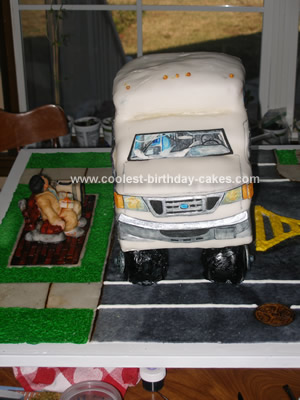 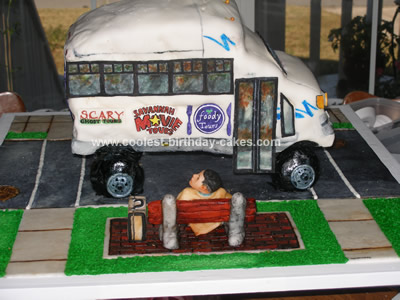