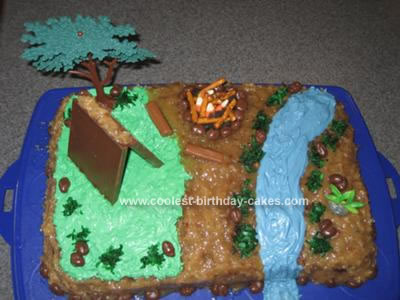 I got most of my ideas for this camp birthday cake from this website so I thought it would be good to share the results! My son wanted a German chocolate cake so I made the cake. I had intended to weave green food coloring in it before baking to give it a camouflage inside but I forgot! That is another added idea.

I used as much of the coconut pecan icing as I could. I bought buttercream icing from store and dyed portions of it for the stream and the green grass. You can also use some of the buttercream icing to make rapid “peaks” in the water. I used a Hershey candy bar for the tent, used raisenets for the rocks, pretzel sticks for the firewood, candy corn for the fire, crushed Oreo for the ash/coals, tootsie rolls for the logs by the campfire.

I used a fake bush and a fake tree my son already had (washed them in hot soapy water first, of course). I touched it off with dyed green coconut for spurts of grass and more raisenets as rocks around the camp. The pecans in the icing made for a little added touch of texture (like more rocks) too! It is all edible except for the trees.

I was very proud of myself in making this since creativity and cake making is not a gift of mine. Tastes better than store bought. Yummy!