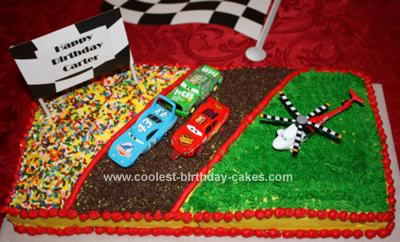 Thanks to several of you who previously submitted to this site. Using your ideas along with several of our own we came up with this Cars Birthday Cake for our son’s fourth birthday.

The cake was made from two boxed cake mixes. Each was baked in a 9×9 pan and I placed them next to each other. The cakes were iced entirely in yellow and trimmed in red. I used the Wilton grass tip to make the grass. The road and crowd areas were make using sprinkles. We added four die cast cars that our son is already attached to.