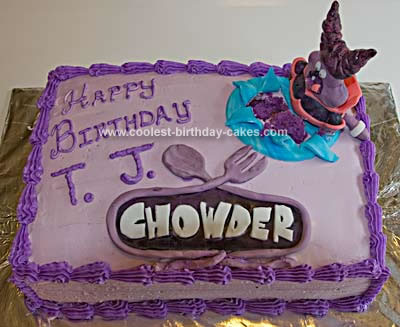 This Chowder Birthday cake was created for my son’s 21st birthday – at his request. I made 2 rectangular sheet cakes using a white cake recipe colored with purple food coloring. My son asked that the cake be grape flavored, and I wasn’t sure how that, or the color, would turn out, so I tried a batch of cupcakes ahead of time to see. Most people thought the grape flavor was a bit overwhelming, but we tried it without frosting, so that made it a bit more intense. On the final cake, I chose to flavor the top layer, but not the bottom. Both were still colored purple.

The Chowder character, and the Chowder logo, were created from hand-molded fondant, and painted with powdered food coloring mixed with vodka. The vodka evaporates quickly as you paint, and does not soften the fondant like water would.

My daughter designs some of my cakes for me, and this was no exception. She wanted the character to be “eating” the cake, so I created a hole in the cake in front of the character, and put some in his mouth and hands.

The frosting is a regular Wilton recipe buttercream, colored with Wilton paste food colorings. I know that cakes look smoother with fondant coverings, but the truth is, most people, especially kids, don;t really like the taste of fondant. I prefer to use it to create figurines.