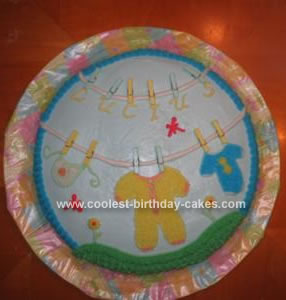 I based this Clothesline Baby Shower cake on the party decorations for my sister’s baby shower, which was all baby clothes hanging on clotheslines. This is the first time I used a crumb coat on a cake and WOW, HUGE difference it made! Made things so much easier as I made a Strawberry cake and not a pound cake.

I attempted to do a faux fondant using crusting buttercream, but I’m used to thinning the icing with water and used too much so it never crusted properly. Either way, I got a fairly smooth backdrop of light blue. I then started at the top with the clothesline and letters. I used Wilton letter stencils for the name and mini clothespins picked up from Party City. They had a great selection of accessories that can be used creatively on cakes.

I piped the clotheslines with a large piping tip and then just pressed the pins on top of it. Before I began I drew a sketch of the clothes and loosely outlined on the cake, but it was a bit hard to get the clothing symmetrical once I really got to icing them. By the way, striped overalls are VERY hard and I had to abandon that idea and went with a onesie on the right side instead.

The interior of the clothing and bib are just star tip #16 with a few details piped on. I decided to star in the grass with a #32 tip and starred the outer edge and it gave the cake a more finished look. I decided in the end to add the flowers by piping the stems and leaves, using #32 for the flower and a dot for the center. The Dragonflies are just piped on there and took a few tries, having to refrigerate in between tries so that icing could harden up a bit.