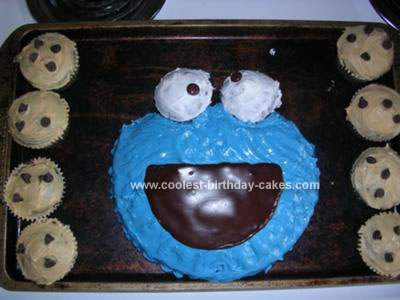 My son loves anything Sesame Street. For his second birthday I decided to make him a Cookie Monster cake. I looked all around for a pan and no one had or I would have to spend as much for one as I would to buy a cake. I looked at some pictures of Cookie Monster and decided I could make just his face and then add the cookies which I wanted to do with the pan as well.

Cookie Monster’s face is a 9 in. round cake that I cut just a little off the top to make where his eyes are a little more flat. I also cut out a little section for the cupcakes to go for his eyes. I iced the cupcakes white and put an M & M on each one in different positions for his eyes.

I iced the entire face with blue icing using a star tip to give it a little texture like his fur. I then drew on his mouth with chocolate cookie icing.

The chocolate chip cookies are cupcakes that have peanut butter buttercream icing that I just put chocolate chips on. I put them in all different directions to make them look more natural.

All of this was made from one box of cake that I just separated out into the round pan and the cupcakes.