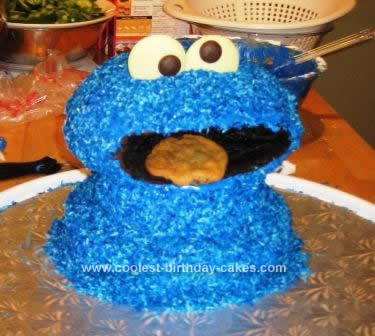 This Homemade Cookie Monster Cake Design, the cupcakes and the chocolate chip cookies were done for a cake auction at our church. We started out with a cake that was about twice the size, and due to structural problems, we downsized, but were more than pleased with the results. Another glitch that we ran into was runny icing. I was planning to do the fur with the Wilton grass tip, and unfortunately, after the first layer, everything started globbing together. So, again, we re-assessed, made the necessary changes, and iced the cake with the blue icing, followed by tinted coconut, which was how we planned to do the cupcakes anyway.

The finished product was an 8″ layer, followed by an 8″ layer that was re-sized to about 6″. Then we cooked two cakes in Pyrex bowls and inverted them to make the head. We cut out the mouth, and filled in with black icing. The eyes were made from white chocolate wafers, and milk chocolate wafers which were stuck on with icing – of course you have to make sure that the pupils are off-set, making them “googly” eyes. Then they were stuck into the cake, and suddenly, the Cookie Monster came to life!

The cupcakes were much easier – just coated in the same icing, dipped into the tinted coconut, and smaller “googly” eyes were made using small white chocolate wafers, and milk chocolate chips.

The cake was put on the cake plate, surrounded by stacks of chocolate chip cookies (‘cuz that’s Cookie Monster’s favorite cookie!), and the “Mini-cups” as we called them, were placed around Cookie, and on top of the stacks of cookies on the cake plate. We originally planned to make it look like they were eating cookies, but the cupcakes didn’t grow big enough out of the cupcake papers, so they just ended up looking like cute little monsters with googly eyes instead!

We had a ton of fun making this cake, and it sold at the auction for $175, which we were very pleased about, especially since this was our first effort at making a cake of this nature! 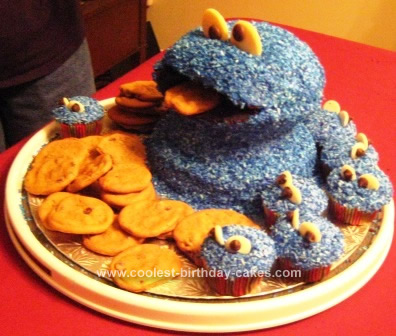