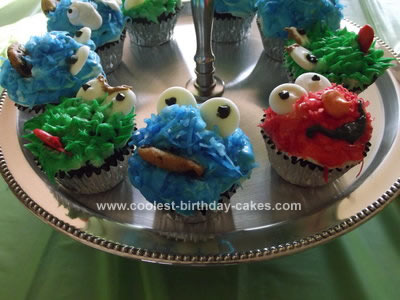 I made these Cookie Monster, Elmo, and Oscar the Grouch Cupcakes for my very sweet 2yr old little boy’s birthday! He loves Sesame Street and especially Elmo! All of the cupcakes are chocolate.

The Elmo and Cookie Monster cupcakes are filled with homemade coconut cream (the filling was just homemade vanilla pudding with coconut extract). To fill the cupcakes I used a small knife to cut a cone shape, filled in the space with the pudding, then cut off all but the top of the cone shape and used it to plug the hole on the top of the cupcake.

Then I covered with homemade cream cheese icing. I then sprayed the icing with spray food coloring (found in the cake decorating section at Walmart). I also used the spray coloring to dye coconut red and blue. Sprinkle the coconut over the cupcake. The eyes on all three of the cupcakes are just white chocolate melting pieces (not white chocolate chips), with black dyed icing doted in the middle.

The nose and mouth on Elmo are just colored icing and Cookie Monster just has a cookie (or piece of a cookie) in his “mouth”. Oscar is not filled and is 100% coconut free! I just used a pastry bag and tip to make the icing look like crazy “fur”. Then I used spray coloring to turn him green.

Again, the eyes are melting pieces and my husband thought we needed to make him stick his tongue out so we used red spray color on a white chocolate melting piece and then cut it to look like a tongue. Oh, and don’t forget to put the brown angry eyebrows on Oscar, we just used icing!!

I hope your kiddos love them as much as my kids did!