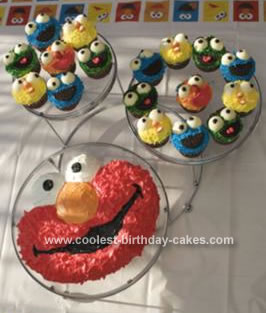 For our Son’s second birthday we had a Sesame Street theme. He was so in love with Elmo so we bought a Wilton Elmo shaped cake pan. The closer it was getting to his special day, he was getting more and more in love with the other characters so that’s when we knew that we had to add some of Elmo’s special friends(in the form of cupcakes)!

Here’s what we did for our Sesame Street cupcakes:

ELMO CAKE: We used the Wilton Elmo shaped pan and decided instead of making the frosting for his face with a ‘star’ tip all over, it would save a ton of time by frosting him with red dyed frosting and then taking a small rubber scraper and ‘fluffing’ him all over to make his face furry. For the eyes, we used plain white frosting and tried to get them as smooth as possible. Same with his nose but we used food dye to make it orange. For the eye pupils we used black icing. TIP- To make Elmo red, you are going to need a lot of red dye. We used almost an entire container. He got darker as time went on (It said so on the package and we weren’t sure, but it really did deepened in color as time went on!)

Big Bird: Big bird was frosted with yellow dyed frosting, Then we used a white chocolate Lindt ball cut in half for his eyes. We frosted the top of his eyes with a blue and pink stripe (with colored gel). Then we used 2 candy corns for the beak and sprinkled the rest of his face with yellow sprinkles to add texture. Black icing for the pupils.

Cookie Monster: He was really easy- and so cute! Frost the cupcake with blue dyed frosting and add the white Lindt ball (cut in half) for eyes. Take an Oreo and twist to get two. Now we cut the Oreo in half to press it into the frosting to get a mouth. (You could also use a chocolate chip cookie and stick it flat OR coming out of his mouth- we just liked the look of the Oreo better). Then we sprinkled him with blue sprinkles and added the googly eyes with black icing.

Oscar the Grouch: He was frosted with green dyed frosting and we used the same Lindt balls for eyes. A raisin to form bushy eyebrows, an Oreo cut in half for his mouth and then red frosting to make a small heart on his mouth for his tongue & black icing for eye pupils.

Zoey: She was frosted with orange frosting (same color as the nose on Elmo) and then had the same Lindt ball eyes, a red peanut M&M for the nose (we couldn’t find any pink ones. I’m sure during Valentines day you could!) and an Oreo half frosted in red for her mouth. For her eyes, we frosted the tops in blue and then went in with some chocolate frosting and a toothpick to make eye lashes. Don’t skip this part- it made the whole Zoey look complete!! Then we sprinkled her with orange sprinkles, again- for the furry texture.

All in all, these were a tad time consuming (depending on how many you make) but were really not that difficult to do! It’s really decorating with candy and not so much concentrating on being super talented- they are pretty hard to screw up!

These were fun to make!