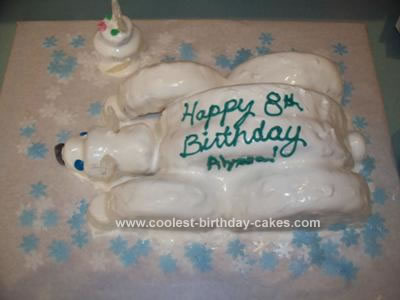 This year’s theme was an Arctic party. So, I made a polar bear cake. Like the tiger cake, it was also a cinnamon flavored cake, with cinnamon butter cream frosting to hold the pieces together. I used 3 round cake pans to build this cake as well as a few cupcakes.

You’ll need a recipe and a half. I used the Betty Crocker yellow cake recipe, and added the cinnamon to taste. Be sure to use slightly smaller pans than each other for the legs. I used the 8″ round for the body, and smaller baking dishes that are oven proof for the legs. I also made 3 regular sized cupcakes, and 4 mini cupcakes.

Cut the 8″ round in half, and stick it together with the cinnamon icing. When the icing hardens up a bit, turn it on it’s side. Next, cut the other round cakes in half and place the larger one in the back for back legs and smaller in the front. Hold them in place with the cinnamon icing. Two of the smaller cupcakes use for the paws in front. Place them under the front round cakes. The regular cupcakes will go bottom to bottom for the head. Make sure you take off the cupcake papers if you use them! A mini cupcake is used for the nose. The leftover cupcakes you can eat or turn into an Arctic Hare.

I used blue M&M’s for the eyes, and gumdrops for the nose and ears. Shape the ears by rolling out the white gumdrop. Cut it and shape them into teardrop shapes around a toothpick.

I covered the cake in 7 minute frosting, it tastes like marshmallow cream. It was easy to drizzle it on, but, the eyes kept sliding off. I recommend sticking with the butter cream frosting. 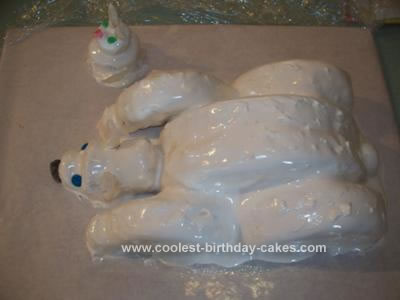 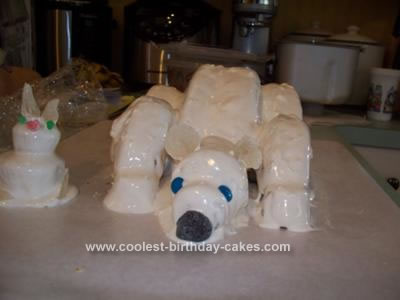 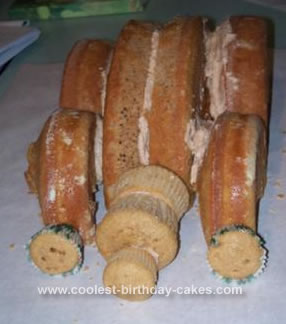