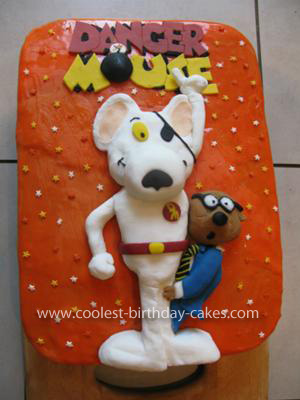 For our son’s fifth birthday cake, after a couple of previous years of ‘cool cakes’ (see Star Wars Max Rebo and Mike and Sully previous submissions on Coolest Cakes!) we have set ourselves up for a task every year to make sure we make a cake worth a five year old’s expectations! Added complication of coming back the night before the party after a weeks camping, so my hubby made the icing danger mouse and the writing BEFORE we went camping and I had last minute cake baking on the night of our return from holiday, but the actual icing of the cake was made easier by having the character previously made, just had to fill the cake and then ice with a complete orange layer of icing then add the characters and writing on top.

The cake was a delicious rich chocolate cake recipe with butter cream filling (TOP TIP, for choc buttercream add a couple of tablespoons of golden syrup, works really well). Cake was FOUR TIMES quantity to get the size we needed, and cooked for about an hour and a half. Recipe was melted butter, with dark choc and cocoa, then add to egg yolks and caster sugar, mix in flour and baking powder and milk and then fold in whipped egg whites…makes for a really nice cake, got a lot of compliments on the day! Danger Mouse and Penfold were made of solid icing (bought a wide variety of colours on line, so hubby moulded them like plasticine)….kept wrapped in cling film for the week for ease of icing on the night before the party, and then rolled out orange icing over whole cake. Stars were little shop bought cake decorations like hundreds and thousands but star shaped.

Our five year old was very very happy with his Danger Mouse and Penfold Birthday Cake!