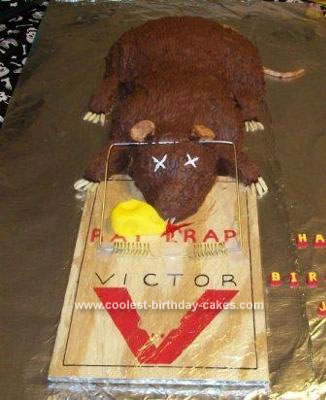 I like to go overboard every year for my son’s birthday party cakes. It also gives the guest something to talk about. It is something that I can give my children that I made myself and they know how long it takes and really appreciate it. It is a humorous project that I spend hours on and have a ball with to really let my creative side out.

This year for my younger son’s birthday I did a Dead Rat in Trap Cake. I wanted something sufficiently creepy for his Halloween themed birthday, but not too morbid or gross. I originally thought of a roadkill, but this morphed into the rat in trap. My mind can really wander!

The rat required 2 large mixing/Pyrex bowls and one small to bake the head, torso/shoulders and haunches. The legs were Biscotti, the claws were almond slivers and the ears and tail were fondant. When I carved out the torso/belly area those curved pieces became the haunches. When I saw the shoulders looking a bit thin I stuck in cupcakes on there side so the round tops became the shoulders. I always have extra batter which becomes cupcakes.

The shoulders and ears were held in place with toothpicks. The head was the small bowl and part of a cupcake stuck on and carved out to elongate the snout. The trap was cut from a piece of plywood we had laying around with a bent wire hanger for the “snap part” and we curled wire around a marker to get a “spring.” The rest was just frosting and then combing the frosting with a fork to get a hairy look.